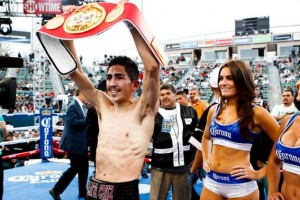 Santa Cruz, originally from Huetamo, Michoacan, Mexico, won the vacant IBF 118 lb. strap in June, when he decisively outpointed the veteran from South Africa, Vusi Malinga, winning all but one round on all three judges’ scorecards.

Challenger, Morel, is originally from San Juan, Puerto Rico. The 36-year-old has been around the block several times and many feel his best days came and went years ago. His best success was at flyweight, where he captured the WBA title in 2000 and made five defenses before dropping a decision to Lorenzo Parra in 2003. Morel also had a stint as WBO interim bantamweight champ when he took a split decision from Gerry Penalosa in 2010. In April, he was beaten solidly via unanimous decision by Abner Mares in a bid for the vacant WBC silver junior featherweight title.

Santa Cruz-Morel will be on the undercard of the Saul Alvarez-Josesito Lopez Showtime card this Saturday at the MGM Grand in Las Vegas as part of a four-fight televised event. Also on the card: Jhonny Gonzalez vs. Daniel Ponce de Leon for Gonzalez’s WBC featherweight title and Marcos Maidana vs. Jesus Soto Karass.