This Saturday, at the Gimnasio Polifuncional in Los Mochis, Sinaloa, Mexico, Jorge “El Travieso” Arce (60-6-2, 46 KOs) returns to the ring for the first time since June’s disappointing two-round no contest against Jesus Rojas. The 33-year-old veteran 4-division world champ will be taking on former world champ, Mauricio Martinez (36-12-1, 24 KOs). 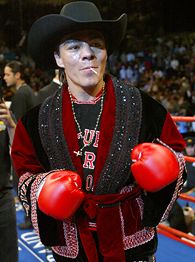 Arce, a native of Los Mochis, has bounced between bantamweight and junior featherweight in recent years and was rumored to be in consideration for a shot at Nonito Donaire’s WBO and IBF junior featherweight belts. Clearly accepting the realities of being at the tail end of a tough sixteen-year career, Arce has been moved wisely, mostly matched up with fringe contenders although he did register an unlikely TKO 12 upset over reigning WBO junior featherweight titlist, Wilfredo Vazquez Jr. in 2011. The popular brawler is undefeated since dropping a unanimous decision to Simphiwe Nongqayi in 2009– a defeat he would later avenge in 2011.

Martinez is a southpaw from Panama whose greatest claim to fame is winning the vacant WBO bantamweight title against Lester Fuentes in 2000. He would defend the belt one time before getting stopped by Cruz Carbajal in nine rounds. Since then, Martinez has been pure journeyman material, scoring some marginal wins, but serving as a record-padder to the likes of Gerry Penalosa, Heriberto Ruiz, and Eduardo Escobedo. He would also fail in a 2005 bid for Ratanachai Sor Vorapin’s WBO bantamweight title.