According to Kevin Iole of Yahoo! Sports, September 15th’s Sergio Martinez-Julio Cesar Chavez Jr. pay-per-view from the Thomas & Mack Center in Las Vegas generated 475,000 buys and brought in about $24 million in revenue. 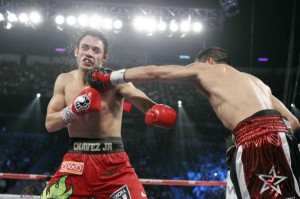 The Showtime card, which brought in about 1.04 million viewers, set a ratings record for boxing on the network, but apparently didn’t have much of an effect on the sales numbers of the Chavez Jr.-Martinez event.

The most obvious option for Top Rank is to pit Chavez Jr. and Martinez in a rematch, but given Martinez’s knee surgery and Chavez’s positive drug test for marijuana, a Cinco de Mayo return bout may be hard to make.

One thing is certain, though. Like it or not, Julio Cesar Chavez Jr. just may be on the verge of becoming a legitimate PPV player. Remember, drawing power is not necessarily related to talent or accomplishment. Controversy and name recognition bring sales.

As for Martinez, without a Chavez rematch and unless he somehow lands a fight with a Mayweather, Pacquiao, Cotto, or Canelo, expect a return to regular HBO. The middleweight division is starting to heat up and there are several interesting possible match-ups down the line. Among them, IBF/WBA champ, Daniel Geale and power-punching paper champ, Gennady Golovkin.