When reporters start believing that they are the story and not what they cover, strange, strange things happen. Ego makes men do some crazy shit. Nothing makes this case more clearly than a scheduled four round bout between boxing writers Gabriel Montoya and Mark Ortega. 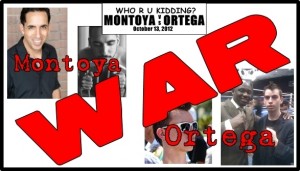 For those who aren’t familiar with the combatants, Ortega writes for The Queensberry Rules, one of the few boxing websites only half-filled to the brim with ego-maniacal douche bags. Montoya, on the other hand, works for Max Boxing, a boxing website run by, well, you know…

According to an anonymous source with knowledge of the situation, personal and professional beefs came to a head at a Las Vegas bar on Mexican Independence Day weekend and resulted in Montoya issuing a mean girl cat slap to Ortega’s face.  And, as most wannabe hard-drinking, hard-brawling Hemingway-types do, he eventually brought the pain to Twitter:

@markeortega As usual you get tough on the Internet. I’m not going back and forth here. You’re getting what’s coming to you. Prepare.

That’s the most I’ll discuss the fight. I’m not doing it for publicity. Kid needs to held accountable for his words. That’s all.

Scheduled for October 13 at The Fortune Gym in Hollywood, where Montoya works out, the buzz has already titillated message board trolls in at least two online forums. No doubt, though, both combatants are deep in training to secure victory and gain a warrior’s glory (cue the Rocky Theme…not the good one, but the gay one from Rocky IV). Forget that the gangly Montoya and the ganglier Ortega, together, are about as menacing as a plate of grilled cheese sandwiches, this will be WAR! (or something similar). Hell Hath No Fury Like a Writer Scorned!

Here’s the preliminary breakdown on Who R U Kidding: Montoya vs. Ortega–

— Can write a full 1,200 word article without the exhaustive efforts of a team of editors and proofreaders.
— Lean and not weighed down by lead-laced free Top Rank media brownies
— Knowledge of Indy Rock scene intimidating to wannabe hipsters

Questions to be answered:

What happens to the careers of boxing “experts” when people find out they fight like drunken trannies?
Will there be VADA testing? If so, will it be supervised by Victor Conte?
Will a Montoya victory result in a 6,000 word travelogue about his bus ride to the gym?

The Boxing Tribune, always on the lookout for hard-hitting news and/or ridiculously absurd fluff, will have exclusive coverage of Montoya-Ortega. Rest assured that we will treat this mega-bout with the seriousness and professionalism it deserves.

*** Editor’s Note: Any harassing emails to staff are considered “on the record” and subject to publication.***

The Boxing Tribune, Shutting Down?

Yep, The Boxing Tribune is shutting down.

That’s what I was going to say a few days ago when I finally went back to reading other boxing sites and re-connected with Twitter. We are, seemingly, so far out of touch with what a boxing website is supposed to be that I just didn’t see any way we could adapt.

A major independent boxing site without agendas, not funded by boxing promoters/managers seems all so quaint now. What the hell was I thinking?

But then I said to myself, “Paul, you are no quitter! You just gotta roll up those sleeves, dig in, and give the people what they want.”

So, with that in mind, here are the changes under consideration for the New and Improved Boxing Tribune:

— Make more fight previews based on re-writing episodes of HBO’s 24/7. If no 24/7 is available, just make shit up and surround it with such a layer of pompous, dense prose that nobody even cares to fact check us.

— Apply for entry into the Fraternal Order of Buffet Divers and any advisory panel that will have us. ´Cuz, you know, belonging to a boxing writer organization means instant legitimacy for anything we touch and it’ll help guide us into all those high-paying boxing scribe gigs. Plus, how cool will our business cards look?

— Suck up to the right louts. If we toss the right salads online, someone very influential could, OMG, actually retweet one of our articles! Sweet.

— Create a fake mean blogger identity that we can easily cast aside when some big shot mentions our name.

— Check our press releases before going to post. I mean, gee, these publicists go through all the effort of making content for us, why the hell don’t we use it? It’s much quicker than actually creating original content. And with all the extra free time, we could post MORE pictures of sweaty fighters with glistening biceps punching speed bags at a media workout.

— Start accepting gifts and favors from promoters and managers. Want us to like your guys? Hook us up with passes, load us with grub, and take us on a wild night of partying in Vegas or a lovely sight-seeing junket to the Boulder Dam. Just be careful. Staff writer, Tim Harrison gets car sick.

— Pick a side and stick with it! Once we find the right promotional sugar daddy, show him why we’re the bottom bitches of his crew.

You can email Paul at paulmagno@theboxingtribune.com or watch  as he braces himself for the mean girl Twitter backlash of a lifetime.  Paul is a full member of the Burger King Kids’ Club, a born iconoclast, and an ordained minister in the Universal Life Church.