Sporthalle, Alsterdorf, Hamburg, Germany– It was hard to tell if Alexander Povetkin (25-0, 17 KOs) was that good, Hasim Rahman (50-8-2, 41 KOs) was that bad, or if it was a combination of both, but the defending WBA “regular” heavyweight champ had no trouble walking through the 40-year-old former world titlist en route to his third defense of the WBA’s paper title. 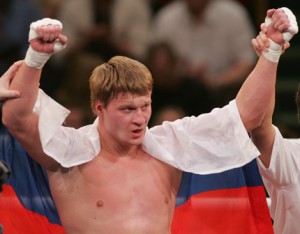 Russia’s Povetkin, 33, wobbled Rahman with every solid punch landed and brought about the beginning of the end for the American challenger with a so-so left hook early in the second round. Rahman had no answer for anything and, when staggered in the second, just put his back on the ropes and remained so passive that, for a second, it appeared that he was playing possum and trying to set Povetkin up for a big counter right hand.

However, there was no game playing, Rahman was legitimately helpless and the referee had no choice but to stop the contest.

We didn’t learn much about Povetkin, who is ranked fourth in the world by The Boxing Tribune, or the quality of the work done with new trainer, Kostya Tszyu, but to his credit, he did what he was supposed to do against a fighter like Rahman.

Now, hopefully, it’s on to bigger and better things for the talented former Olympic gold medalist.

On the undercard, The Boxing Tribune’s ninth ranked heavyweight, Bulgaria’s Kubrat Pulev (17-0, 9 KOs) continued on his solid run of victories with a TKO 11 win over previously undefeated Russian, the 6 ft. 7, Alexander Ustinov (27-1, 21 KOs).