When Brandon “Bam Bam” Rios (30-0-1, 22 KO) meets Mike “Mile High” Alvarado (33-0, 23 KO) Saturday night it should be a rocking affair between two tough action fighters.  The bout will be the co-feature to the Nonito Donaire-Toshiaki Nishioka fight that headlines the card from the Home Depot Center in Carson, CA on HBO’s Boxing After Dark.  The twelve round Jr. Welterweight fight plays second fiddle on this night, but very well may be top dog to win Fight of the Year come December. 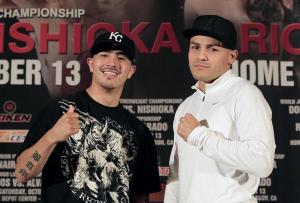 Plenty of times in boxing a fight that looks like a war on paper turns out to be a dud, but it is hard to imagine how these two won’t give fans a slugfest to remember for however long it lasts.  Both have never shown anything other than a willingness to engage their opponents in a toe to toe brawl.  Both are perfectly willing to bleed, absorb shots, and do whatever is necessary to land their own thudding blows. In addition, each man has enough skill to make this more than a basic brawl but not quite enough skill to turn this into a boxing chess match even if they wanted to do so.

Alvarado commented on a recent conference call; “It’s going to be a very entertaining fight for the people. I am going to get in there and do what I do and that’s fight ’til the finish. I know it’s going to be a great, thrilling, non-stop, action fight. And I can’t wait.”

Rios added; “This is going to be a tough fight. Alvarado is a tough Jr. Welterweight. Our styles are similar. He likes to come forward and I like to come forward. I don’t like to play a chess game. I like to go in and handle business and he likes to do that too. It’s going to be one helluva fight. The fans are going to love it and I’m going to come out victorious in this one.”

Rios continued; “The fight I see is we both come forward and I strike him and it is a bloody massacre of a fight. It’s going to be one of those fights that people are going to be on their feet the whole time. I told Robert (trainer Robert Garcia) since I started boxing I have been waiting for that type of fight and I hope this is that fight.”

Toss in the fact they each have something to prove and this could get intense.  Rios was fast becoming a star in the sport with a polarizing personality that made fans either love him or hate him.  He beat down Anthony Peterson into a DQ, came back from getting out boxed to knockout Miguel Acosta to win a title, and blast Urbano Antillon in three rounds.  Rios had the boxing world chomping at the bit.

Then his problems with weight began.  Rios had always struggled to make 135 but failed to make the weight for his fight with John Murray where he showed up at the weigh in looking like a skeleton.  He still managed to gut out an impressive knockout of Murray but it seemed certain he was done at lightweight.  However Rios stayed at lightweight, but again failed to make weight against Richard Abril.  Rios put on a lackluster performance winning a decision over Abril that many thought should have gone the other way.

Rios has finally moved to 140 and assuming he is conditioning and training well he should make the weight and not be a walking zombie at the weigh in.  He will need to prove if he has the same strength and power at the higher weight where he won’t have the size advantage he enjoyed at 135.  Saturday should tell if Rios can continue the rise as a premier action fighter or if his best days are behind him.

Rios for his part is completely confident he will carry his power to 140.

“I was 140 making 135 comfortably. I always had the power. I could have fought at 140 and had the power. Now I will be fighting at 140 and hitting like a 147 pounder. That power is going to follow me wherever I go. The power never leaves a fighter. I will be ready 100% and the power will be there right with me.”

The undefeated Alvarado has been considered a real contender for some time but issues outside of the ring have made Alvarado his own worst opponent.  He spent time in prison in 2009 and then would later return to jail for parole violations.  Now with his legal issues seemingly behind him Alvarado appears ready to make the move he wanted to three years ago.

He made his biggest statement thus far with a thrilling come from behind 10th round knockout of Breidis Prescott late last year.  Trailing on the cards and covered in blood Alvarado kept pushing and stopped Prescott in dramatic fashion.  He followed that up with a decision win over Mauricio Herrera in April of this year.

At thirty three years of age it is likely now or never for Alvarado. His out of the ring problems have put him into a situation where he needs to make his move quickly before father time runs out the clock of athletic ability.

So when Rios and Alvarado enter the ring Saturday they both will have something to prove pushing them to win and win impressively.  A loss would certainly not be career ending but raises questions.  Rios will have to answer if he can hang at 140 without a size advantage.  Alvarado would have to figure out if he has enough time to get back into the mix and if his past years cost him his opportunity.  Considering what they have on the line and their pension for getting into wars in past fights this one has can’t miss action written all over it.

Rios for his part is setting the bar high saying the fight could live up to one of the fan favorite action bouts of all time in Gatti-Ward.

“It’s pretty cool that people are saying that. That it could hit the Gatti list that would be awesome.”

If they come close to matching Gatti-Ward then they can feel free to keep going with a trilogy of their own.