Main Events Promotions announced today Tomasz Adamek (47-2, 29 KO) and Steve Cunningham (25-4, 12 KO) will meet in a rematch of their 2008 fight of the year candidate.  The bout will headline Main Events December 22 afternoon spot on NBC taking place at the Sands Casino in Bethlehem where Main Events has hosted two of their Fight Night cards on NBC Sports. 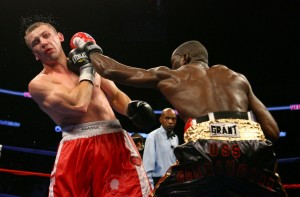 Adamek and Cunningham met for cruiserweight supremacy in 2008 when Adamek won a unanimous decision in a competitive exciting bout.  Cunningham out boxed Adamek most of the fight but Adamek’s power and chin pushed him down the stretch including scoring two knockdowns.  Now, four years later they will go again, this time at heavyweight.

Adamek will have a significant size advantage as he has been weighing around 220lbs at heavyweight to Cunningham being at 207lbs.  In addition Adamek has fought ten times at heavyweight including wins over Chris Arreola, Michael Grant, and a loss to Vitali Klitschko.  Cunningham has one bout at heavyweight getting a decision over Jason Gavern.

Both fighters commented in a press release their thoughts on the rematch.  Adamek stated; “This is a chance for Cunningham to have a rematch with me. The first time we fought there was knockdown and it was a very exciting fight, the fans loved it. I think this is going to be a very exciting fight for our fans again.” Adamek added, “I am ready for a tough fight. I love a tough fight, because after every big fight I have more fans. I am looking forward to this fight with Cunningham. It has been my dream to be the champion of the world and this is important to me, I will be ready.”

Cunningham stated “This is a fight my team and I have wanted since the first one.  Adamek and I have been on two different paths, but in December our paths will collide again. I have respect for Adamek he has done great things in his career, but I’m confident I’ll get the victory. I’m looking forward to it, on December 22nd I’ll be the best Steve Cunningham anyone has seen yet!”

If they can duplicate their first fight it should make for a good event on what will be a big opportunity for both fighters, Main Events, and boxing in general.  This fight will mark the first time in a long time boxing is on major network TV with a return to old school Saturday afternoon boxing.  If they can draw viewers and put on an entertaining match it could open the door to future events on NBC and other major networks.