Technically, four world titles will be up for grabs on the Showtime Championship Boxing show at 8 pm ET/PT. But, as is usually the case these days, the titles, for the most part, are of the “wink, wink” variety. Of the four defending world titlists, only Danny Garcia is an actual #1 fighter in his division, none of the other “world” champs are even in the top 3. 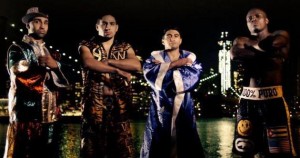 But, title belt silliness aside, fans are getting four solid match-ups on a “free” Showtime broadcast in a legitimately solid event. The undercard, which will be broadcast on Showtime Extreme one hour before the main televised clashes, shows the overall depth of the card with preliminary bouts featuring Daniel Jacobs, Luis Collazo, and Dmitriy Salita.

Here ‘s a look at the four main events, analyzed by staff members at The Boxing Tribune:

In the main event, WBC and WBA Jr. Welterweight champ Danny Garcia (24-0, 15 KO) meets future hall of famer Erik Morales (52-8, 36 KO) in a rematch of their bout in March of this year. In their first meeting, Garcia overcame a slow start to take over in the middle rounds. Garcia dropped Morales in the eleventh and took a unanimous decision to grab Morales’s WBC title.

Morales has not fought since. For Garcia, the Morales win netted a title, but he really announced himself when he scored a fourth round KO of Amir Khan in July, adding the WBA strap. Garcia would probably prefer to move on to other things, but Morales exercised his rematch clause so they will settle things on Saturday.

Morales, who failed to make the 140lb limit in the first bout says he will be in better shape and produce a different result. Garcia feels he respected Morales too much the first time and wants to stop the aging legend this time around. Look for the younger and stronger Garcia to get his way, dominating the bout and stopping Morales around the eighth round.

Paulie Malignaggi (31-4, 7 KOs) should have no problem disposing of Pablo Cesar Cano (25-1-1, 19 KOs) when the two meet for the WBA standard welterweight title Saturday night.

Cano has done nothing to merit another title shot; he beat up a bunch of nobodies on the Mexican club circuit, got shoehorned as a third replacement for Erik Morales, got the snot beat out of him for ten rounds en route to a TKO loss and has since beaten another three nobodies, all at the same venue in Cancun. Cano is no more title-ready than he was in the Morales fight.

Malignaggi will cruise through twelve rounds of showing off his boxing ability, but he does not have Erik Morales’ power and will thus be unlikely to stop a guy who took Morales ten rounds. This should be an easy decision win in the 11-1, maybe even 12-0 scoring range.

The opening fight of the night pits former jr. welterweight champion Devon “The Great” Alexander (23-1, 13 KOs) against current IBF welterweight titlist, Randall “KO King” Bailey (43-7, 37 KOs). Bailey is one of the biggest punchers in the sport, pound-for-pound. At 38 years of age, Bailey looked lost against Mike Jones in their June 9 welterweight title fight. All it took was two big right hands – one straight down the middle and one uppercut – and Jones was out for the night. Bailey, who has won four straight, is on the downside of his career and he’ll have to deal with plenty of movement from Alexander as he tracks him down to line him up for a home run shot.

Devon Alexander comes in on the heels of two Jekyll and Hyde performances against Lucas Matthysse and Marcos Maidana. Alexander was in trouble several times in his fight with Matthysse, and many felt he should have lost, but he escaped with the decision. In his next fight, Alexander looked much better in making Marcos Maidana look amateurish. Alexander will have to avoid Bailey’s long right hand and box from outside, as he’s shown that he can be hurt by big punchers. With his ability to move he should be able to keep Bailey from getting in close, but if Bailey is able to get inside, Alexander lacks the ability to fight in close.

N’Jikam (27-0, 17 KO’s) is the current interim WBO middleweight champion. He has fast hands, a good jab, good footwork, and likes to stay up on his toes, throwing shots from the outside. His constant movement makes him difficult to hit clean. He has a solid chin (only being dropped once), and respectable, but not devastating punching power. He’s fought solely in France, with the exception of three bouts that were fought close by. He’s fought good opposition, but nothing special.

Peter Quillin (27-0, 20 KO’s) has every advantage coming into this fight. Quillin started his pro career on Lou DiBella’s Broadway Boxing circuit in New York, so he’s fighting in front of his hometown crowd again. He has the advantage in height, strength, punching power, and has faced the better opponents. He has good hand speed, a solid jab and fights well in close. Quillin has also shown much improvement since 2010 when he started working with Freddie Roach.

N’Jikam will look to keep Quillin on the outside by using his long jab and footwork. It may take a few rounds but Quillin will eventually catch up with him, get inside that reach and land the cleaner, harder punches en route to a unanimous decision win and the WBO middleweight title.