Writer disclaimer: Before reading this, understand the writer, yours truly, is a native of Philadelphia and has an inherent bias for Philly fighters.  That being said, everything you read in the following article is an opinion based on boxing knowledge and observation of fighters and writers mentioned.

Saturday night, WBA and WBC Jr. Welterweight champ Danny Garcia (24-0, 15 KO) will put his titles and top spot in the division on the line against future hall of famer Erik Morales (52-8, 36 KO) in a rematch of their title fight from earlier this year.  For Morales it is a chance to have one last shot at showing his greatness. For Garcia it is one more opportunity to show his place among the elite of the division. 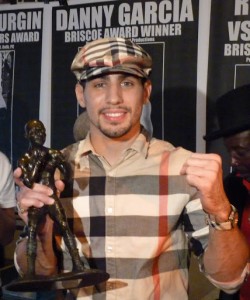 Garcia earned his title shot with wins over veterans Nate Campbell and Kendal Holt in 2011.  Then he defeated the legend Morales in April to win his first title, getting the 140lb WBC belt.  It was a big moment for Garcia, but really did not get him true acclaim as Morales was considered past his prime and far north of his ideal weight.

Then, Garcia took his shot at the top when he met Amir Khan in July.  Khan was favored by nearly every pundit to defeat the upstart Philly fighter, Garcia.  While those pundits favored Khan’s speed and flare they overlooked Garcia’s chin, power, and ability to simply win despite not being someone who stands out in any one area.  Simply put, Garcia does a little of everything and finds a way to win.

Garcia would tough out the early speed onslaught from Khan before crushing the Brit in round three with a devastating left hook that changed the fight.  Khan showed heart to keep fighting, but Garcia put him down twice more in the fourth to score an impressive stoppage and become the top man at 140.

Somewhere along the way, though, many of the aforementioned pundits decided Garcia is still not worthy of his current status.  Multiple writers have stated Garcia is simply “keeping the throne warm” for other jr. welterweights, especially Lucas Matthysse.  It has been written on many a boxing site and blog that Matthysse is the real king at 140.

The argument goes that Matthysse (32-2, 30 KO) is really an undefeated fighter because he was robbed in his two defeats.  Matthysse is a solid fighter who brings toughness and knockout power so he draws the excitement of fans and certain writers.  While the Argentine Matthysse certainly is a top contender, those giving him the “throne” are using a bit of revisionist history to make their point.

Take Matthysse’s decision loss to Zab Judah where many say he was “robbed”.  The fact is Judah out boxed and outscored Matthysse for the majority of the fight.  Matthysse drew attention with a gallant late rally where he dropped Judah and nearly got the late KO.  That does not change the fact that scores are determined by totaling every round instead of what people remember late in a fight.  At best, it was a close fight that could have gone either way.  Hardly a robbery.

In his second loss, Matthysse was supposedly robbed against Devon Alexander with the fight taking place in Alexander’s hometown of St. Louis, Missouri.  Again, not  a robbery but a close fight.  Matthysse scored some knockdowns, Alexander won rounds by boxing, and the result went to the hometown fighter. Matthysse got the short end of a close stick.  Welcome to the sport of boxing.

Garcia has always made sure he was on the right end of the stick.  He has had his close calls along the way.  He took shots from a puncher as strong as Kendall Holt, overcame the veteran craft of Morales, and used guts and determination to overwhelm Khan.  He deserves his place at the top of 140.  This is no knock on Matthysse.  Simply a statement that each is in their proper place at numbers one and two right now which other writers need to understand.

Why Garcia is being pushed aside is hard to understand.  Maybe because he is not a lighting fast razzle-dazzle ring technician who simply wins.  The fact is that wins his fights and has beaten everyone put in front of him.

The problem for Garcia is Saturday will do little to prove the point made above.  Even a convincing knockout of Morales will do little for his cause.  Morales is seen as over the hill and beating him will be viewed as doing what is expected.  Garcia didn’t ask for this fight but was forced into it when Morales exercised his rematch clause.

So let’s acknowledge the facts that right now at 140 Danny Garcia has done enough to earn his top spot.  Hopefully in the near future he and Matthysse will settle the top spot in the ring where the debate belongs.  Until then, give credit where it’s due.  Garcia is the top dog at Jr. Welter.