In 1997, WWE impresario Vince McMahon pulled what became known as the “Montreal Screwjob”, where unbeknownst to popular wrestler Bret Hart, he was set to lose a match in front of his Canadian fans in a fashion that would create maximum drama for television (a screwjob, in wrestling parlance, being a sort of enforced method acting where the wrestler’s genuine surprise at his mistreatment becomes part of the storyline.) 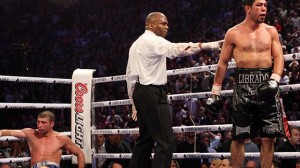 It is hard not to look at the IBF, Groupe Yvon Michel, and Interbox and not think that a different sort of screwjob in Montreal has been underway for a fair while now, particularly in the super middleweight ranks. Between GYM’s control of the contenders and Interbox’s control of the longtime champion, the IBF may as well be considered as a regional belt for the province of Quebec.

Lucian Bute, an Interbox-promoted fighter, acquired the IBF championship by legitimate enough means. A title eliminator against Sakio Bika led to a title shot against then-champion Alejandro Berrio, whom Bute knocked out in eleven rounds. Beat the guy with the belt, get the belt. Sure, Berrio was the champion and had to haul his ass to Montreal when he had never fought in Canada before and had most of his fights in Colombia and Florida, but fights cost money to promote and the home-ring advantage no doubt netted Berrio a far bigger payday than if he’d tried to claim similar rights fighting in front of a bunch of candy men in Medellin.

Bute then defended his title against an array of mediocre fighters with no particular professional distinction. He even lost one of those fights in the eyes of everyone watching except for referee Marlon Wright, who gave a 23-second long count that rescued the decision victory over Librado Andrade for the hometown fighter. The infamy of that moment has been mitigated by Bute’s subsequent four-round demolition of Andrade in the rematch, a fight that looked like what the first fight should have looked like, namely a gross mismatch between a genuine titlist (if not a division champion in the lineal or undisputed sense) and a fringe contender.

Carl Froch has thrown a monkey wrench into these proceedings. By knocking out Bute in five rounds in Nottingham, the most important chip in the Montreal control of the IBF has been taken away, namely the IBF title. However, larceny abhors a vacuum, and the sanctioning body has jumped to the rescue with a little help from the other guy with a stake in Montreal boxing at super middleweight, Yvon Michel, the Francophone Bob Arum.

Michel’s GYM (Groupe Yvon Michel) Promotions manages every other Montreal fighter you’ve ever heard of, from undercard stalwarts like David Lemieux, Sebastian Demers, and Renan St. Juste to an honest-to-gods contender in Adonis Stevenson. Riding Interbox’s coattails has been Michel, collecting plenty of co-promotional money by supplying the undercard fights to justify the big Canadian-dollar pay-per-view revenues selling Montreal boxing to willing Canucks and packing Centre Bell (as it is known in French) with as many spectators as that arena sees outside of Canadiens hockey games. Indeed, with the NHL locked out, boxing is what is keeping Centre Bell afloat.

Michel has been just as cuddly with the IBF as Interbox has been; indeed, so complete is the illusion of control that your columnist made the mistake of associating GYM and Interbox as if they were the same entity (or a joint venture) thanks to a bit of confusion when reading the bout sheets.

So imagine the surprise of absolutely nobody when the IBF mandated that Carl Froch face Adonis Stevenson lest he be stripped of his title ahead of his planned rematch with Lucian Bute. You see the conspiracy developing here. If you don’t, perhaps you should read the Boxing Tribune archives for similar misadventures (the setup of Juan Manuel Marquez by the WBO, which your columnist is going to cover in depth in next week’s Southpaw column, is underway as we speak.)

It doesn’t take a rocket scientist to see where this is going. The symbiotic relationship between GYM and Interbox means they can scratch each other’s backs. Froch gets stripped of the title and Bute uses it as an excuse to duck the rematch, since no title would be on the line, and Bute’s no more equipped to beat Carl Froch now than he was in May. Adonis Stevenson gets to fight some patsy (could be anyone; your columnist wouldn’t be surprised if it were someone on a Francisco Sierra/Edison Miranda level, maybe even Dionisio Miranda if the IBF has the balls to more or less openly admit who’s buttering their bread; the point is that it’s someone Stevenson will be able to knock out), and Stevenson, who is already 35 years old, will then be thrown to the wolves against a younger Lucian Bute. Yvon Michel’s got plenty of other fighters (and a wink-nudge agreement involving who promotes the next prospect is always a closed-door meeting away), and Interbox gets their main event title headliner back.

Everybody wins, right? And since Bute’s got his one loss to a “real” fighter, nobody’s giving any heat over him fighting Andre Ward. Bute can spend the rest of his career knocking out patsies in front of partisan Canadian crowds, Interbox and GYM can collect their promoters’ checks, the IBF can have its sanctioning fees, and everybody’s happy, not least of which because whatever else you may say about Lucian Bute, he is sure as hell a ton of fun to watch fight.

Fox Doucette covers Friday Night Fights for The Boxing Tribune. His weekly column, The Southpaw, appears on Thursdays. Fan mail, hate mail, and conspiracy theories can be sent to beatcap@gmail.com.