The WBC bantamweight title will be on the line when Shinsuke Yamanaka (16-0-2, 11 KOs) puts the belt on the line against former super flyweight titlist, Mexico’s Tomas Rojas (39-13-1, 26 KOs) at the Xebio Arena in Sendai, Miyagi, Japan on Saturday, November 3. 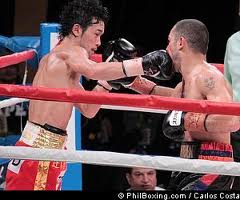 Yamanaka’s last win was the most impressive of the 30-year old Japanese southpaw’s young career. He scored a convincing unanimous decision win over former 2-division champion Vic Darchinyan in April. Considering Darchinyan’s lack of big success in the division, the win was initially taken with a grain of salt. After Darchinyan outclassed undefeated prospect Luis Orlando Del Valle last month, Yamanaka’s win looks that much more impressive. Prior to the win over Darchinyan, Yamanaka, ranked number two by The Boxing Tribune, stopped third-ranked Christian Esquivel in eleven rounds last November, capturing the vacant WBC title with the win.

Rojas’ colorful career is at the back end, and he’s fighting above his best weight. Rojas, now 32, spent the early part of his career on Mexico’s club circuit before graduating to the big leagues. He often came up short against top-level opposition. After getting his career on track after losing five early fights as a prospect in Mexico, Rojas dropped a decision to Christian Mijares in 2004. The very next year Rojas, unranked as a bantamweight, would go on to lose three straight to Luis Maldonado (SD10), Jose Nieves (UD10), and Gerry Penalosa (UD10). Rojas lost two more minor title bids to future bantamweight stalwart Anselmo Moreno and future hall of famer Jorge Arce, a fight now shrouded in controversy following Rojas’ allegations he threw the fight at the behest of Arce’s team. Rojas won the vacant WBC super flyweight title against Kohei Kono in September of 2010. He defended the title twice before dropping a unanimous decision to Suriyan Sor Rungvisai last August. In his last three, Rojas is undefeated against club-level opposition.

Rojas, like Yamanaka, is a tall fighter. Standing 5-feet, 8-inches, Rojas has a tendency to stand too tall, leaving a large target to be hit. In his loss to Vic Darchinyan his height worked against him, when a looping left hand landed on his chest and put him down for the count. Rojas is also a southpaw, but unlike Yamanaka, his punches are wide and looping and his footwork can be sloppy. Rojas relies on his work rate to overwhelm his opponents, although he is not known as a particularly smothering offensive fighter.

Across the ring, Yamanaka is a much more polished fighter. His jab and footwork stand out in his arsenal. His power is less than outstanding, and his modest 61 percent knockout rate is the result of smart and timely combination punching. On the heels of his jab, Yamanaka shoots a straight left hand, and at times he can throw a right hook and uppercut off of his jab.

This should be an interesting clash of styles between two good fighters. Yamanaka is the more polished, yet less experienced boxer, with Rojas playing the role of the veteran brawler. Yamanaka’s ability to cover up and shuffle out of harm’s way against Vic Darchinyan kept him from taking many flush shots from the aggressive Armenian brawler. It makes for an interesting bit of mystery to see if Rojas, a bigger, more effective brawler can hand Yamanaka his first career loss, or if he’ll be just as befuddled as was Darchinyan.

Expect Yamanaka to withstand Rojas’ early aggression, using his movement to score clean, straight punches before moving out of the way of Rojas’ wider punches. Rojas will land on occasion, but will tire as Yamanaka hits the many openings made available to him as he cruises to another easy unanimous decision victory.