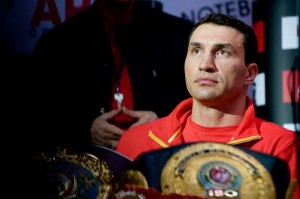 Klitschko (58-3 with 50 KOs) will be expected to retain against unbeaten Wach (27-0 with 15 KOs) despite the recent passing of the champion’s trainer and mentor, Emmanuel Steward.

Wach has a rare advantage in size, standing an inch and a half taller than the Ukranian, but the Pole doesn’t have a depth of quality in his resume and will surely be relying on penetrating Wlad’s effective defences and landing a clean crisp shot on the champions whiskers. A tactic that 16 have tried and failed with since Lamont Brewster succeeded 8 years ago.

Expect Klitschko to wrap things up in the first half with a tribute performance to his late trainer and friend.