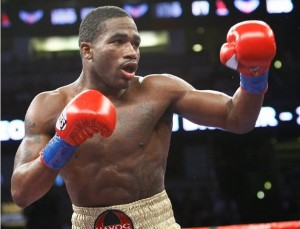 Broner, working from the Mayweather-esque high shoulder stance, picked DeMarco apart, piece by piece, over eight rounds. Executing a tactical gem, the native of Cincinnati mostly stood in the pocket, right in front of DeMarco, and broke the strong and tough defending world champ down.

In the fourth round, Broner discovered a home for a thudding uppercut and managed to use that weapon effectively right until the very end of the contest.

DeMarco, busted up and broken down, would be sent to the canvas in the eighth round from an accumulation of punches. DeMarco was game to continue, but never got a chance to beat the count as his corner immediately threw in the towel to put an end to the one-sided contest.

There are plenty of options for the new WBC lightweight champion, Broner, but the most attractive for fight fans would be a title unification with Scotland’s WBO champ, Ricky Burns. More realistic, though, is a mandatory defense with the WBC’s no. 1 challenger, Japan’s Nihito Arakawa.

In the televised opener, the heavyweight division’s “next big thing,” Seth Mitchell (25-1-1, 19 KOs) was removed from his path to glory in just two rounds by a motivated Johnathon Banks (29-1-1, 19 KOs), who dedicated his performance to his trainer, the late Emanuel Steward.

It was Banks’ right hand in the second round that set up the end. The situation was similar to Mitchell’s last bout against Chazz Witherspoon, except this time Mitchell would never be allowed to recover and would be sent to the canvas three times before referee Eddie Cotton called an end to the contest at the 2:37 mark of the second round.

The victory puts Banks in an odd situation as the newly crowned WBC International champ and winner of this official WBC semi-final eliminator. Banks is now one step closer to a contest with WBC heavyweight titlist, Vitali Klitschko, brother of the fighter he trains full-time in the wake of Emanuel Steward’s death, Wladimir Klitschko.