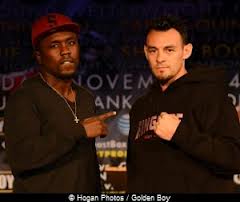 Andre Berto has been inactive since his technical stoppage win over former IBF welterweight titlist Jan Zaveck in September of 2011. Without a title defense, Berto relinquished his title in favor of a rematch with Victor Ortiz in 2012. The fight was scheduled to take place in February, but an arm injury forced a postponement of the rematch of their 2011 Fight of the Year, until June. The rematch would be shuttered altogether when Berto tested positive for traces of the banned substance norandrosterone, also called nandrolone. The California State Athletic Commission (CSAC)cited Berto’s positive test being through an agency (Voluntary Anti-Doping Association, or VADA) not in connection with the CSAC, in issuing Berto his license to fight again without a suspension.

Guerrero, who has campaigned for a fight with the aforementioned Mayweather, made his successful welterweight debut in July, when he out-pointed Selcuk Aydin over twelve exciting rounds. The former featherweight and super featherweight champion campaigned as a lightweight for a year, capturing two Interim title belts in the process, before making the two-division leap up the welterweight.

Guerrero’s range and fluidity are his best assets. He also puts his punches together, keeping them varied and coming from different angles. His long straight left hand is his best punch, but he has a nice short right hook as well. His punching power, which stood out in the 122 and 126-pound divisions, hasn’t traveled up in weight with him. In his lightweight fight with Michael Katsidis, Guerrero found his comfort zone a little more crowded in the later rounds. And against Aydin, Guerrero fought a lot more on the inside than he has been accustomed to. On the inside Guerrero is susceptible to uppercuts, due to the placement of his hands by his ears. Against Aydin, the uppercut was a punch that Guerrero ate with regularity.

Andre Berto’s main assets are his hand speed and punching power. His power isn’t the stuff legends are made of, but when he loads up on his punches (which is often) he’s able to move his opponents. He’s shown a good left hook, as well as a nifty counter right hand, which sent Victor Ortiz thudding to the canvas in a back-and-forth sixth round in their 2011 barn-burner. Berto’s defense and infighting leave much to be desired. He often stands with his feet too far apart, hindering his movement and making a hittable target. When he’s pressed on the inside, Berto has little to offer outside of holding and tying up his opponent.

For Guerrero to be successful on Saturday night, he’ll need to jump on Berto early on. Guerrero is a rhythm fighter, using his jab and movement to set up his straight left hand while mixing in the occasional right hook. When Berto gets in close, Guerrero should step out to his right and throw the right hook and move to keep Berto turning and prevent him from being tied up. When Berto gets inside, Guerrero will need to be mindful of uppercuts shooting up from the middle.

Berto’s best chances lie in disrupting Guerrero’s rhythm and hurting him early. If Berto is able to slip Guerrero’s left hand, his counter right hand will have to be a big factor. After having trouble with southpaws early in his career, Berto gained a lot of valuable experience in dealing with southpaws, and he’s developed a solid weapon in his right hand. On the inside, Berto should take a page from Selcuk Aydin’s book and throw his uppercut early and often, while looking to follow it up with a left hook.

Floyd Mayweather Jr. holds the WBC World welterweight title, but has not defended the title since winning it from Victor Ortiz in September of 2011. With his erratic ring schedule and simultaneous obligations to the WBA, where he reigns as junior middleweight champion, it is unclear whether Mayweather will return to the 147-pound ranks to defend his title. But for all intents and purposes, this fight is for the right to be named the number one contender to Mayweather’s title. Whether the winner actually gets a shot at a career payday remains to be seen.

Look for Guerrero to start fast, working behind the basic one-two, and make Berto look bad in the first few rounds. Berto will work his way into his comfortable range in the middle rounds, probably from round five on, and force Guerrero into a defense and counter mode. As we’ve seen in the past, Berto will tire late and allow Guerrero to box from the outside and take a 115-113 decision victory.