Ricky Hatton’s fairytale comeback ended as a nightmare tonight at the Manchester MEN Arena in front of 20,000 adoring fans as he suffered a 9th round KO loss to Ukranian former world champion, Vyacheslav Senchenko.

Hatton started brightly, showing plenty of his trademark aggression, marauding his opponent and throwing hooks to the 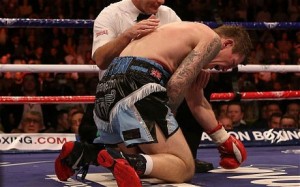 But as the rounds wore on it became increasingly obvious that Hatton’s defence was non-existent, he showed no head movement whatsoever and attacked in straight lines shipping jabs and straight rights from his taller foe with almost every advance.

While many had Hatton up on the cards at the time of the stoppage I think there was an element of wishful thinking, Senchenko had been scoring with cleaner punches throughout the fight while Hatton’s work appeared crude and desperate.

In the end, and in a twist of irony, Hatton was felled with a body shot that left him unable to beat the count.

They say that fighters dropping down in weight are left weaker in the core and perhaps the 5 stone lost in the past 6 months proved his Achilles heel.

Permanent retirement is surely on the cards and fans now worry only for Hatton’s future health, physical and mental considering how big a shock this was to all who thought Hatton would bulldoze Senchenko en route to a world title showdown with Paulie Malignaggi.

Malignaggi looked perhaps the most shocked in the arena and was surely counting the cost of a Hatton loss financially given that a defence of his WBA Welterweight title in New York against Hatton and in front of an army of his traveling fans represented a sizable pay day for a fighter enjoying an Indian Summer in his own career.

Where Malignaggi goes from here remains to be seen. Hatton must surely go home, take some time and seek some professional help to ensure he does not slip back into the clutches of the demons that took him after the Pacquiao loss.

On the undercard, in a Super Bantamweight contest Scott Quigg bested fellow Brit, Rendall Munroe in a rematch of their technical draw from 6 months prior to take a WBA interim title.

Munroe started brightly using his jab and controlling the centre of the ring but Quigg focused his efforts on Munroe’s body with hard hooks and after sharing the first 5 rounds between them Quigg’s work bore fruit in the 6th round when he got the stoppage and claim the victory and the strap.

The win pushes Quigg onto the world scene and potentially a step closer to a domestic showdown with another world rated Brit, Carl Frampton.

In the other main supporting bout of the night, Martin Murray claimed the WBA ‘interim’ Middleweight belt with a 6th round stoppage of Venezuelan banger, Jorge Navarro.

Navarro was game but his lack of class showed throughout the fight and Murray boxed neatly and effectively until pouring on the pressure and forcing his opponents corner to throw the towel in during the 6th.

Murray had scored a knockdown in the first from a short right hook and in the 6th closed the show with a peach of a straight right and a relentless body assault that ended the fight.

There is talk of Murray now traveling to Buenos Aires to try and do what countrymen Matt Macklin and Darren Barker tried and failed to do and beat P4P ranked middleweight kingpin Sergio Martinez.

So success for Hatton’s main fighters but bitter disappointment for the man himself.

The best laid plans and all that.