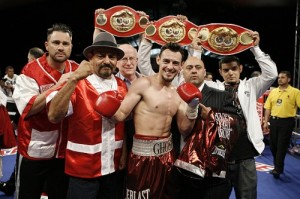 Looking like a blow-out in the making with Berto suffering one knockdown in each of the first two rounds, the former world champ eventually regained his composure despite a pair of badly swollen eyes and obviously dead legs.

Guerrero fought like a life-long welterweight and not a convert from featherweight/super featherweight and constantly had Berto’s back against the ropes, making the former titlist react rather than try and establish his own game.

From the fourth round on, the action was of the back and forth variety with Guerrero mostly getting the better of it despite dealing with his own badly swollen eye.

At the end of the contest, both fighters had accounted well for themselves with Guerrero now eliminating all doubt as to whether he belongs in the Top 10 of the 147 lb. division. At the end of twelve, all three scorecards read 116-110 for the defending WBC interim welterweight champ, Guerrero. The Boxing Tribune also scored the bout 116-110 for Guerrero.

On the televised undercard, 24-year-old Keith Thurman (19-0, 18 KOs) stopped veteran Carlos Quintana (29-4, 23 KOs) in the fourth round of their scheduled ten round bout.

Quintana’s best bet in this bout was to use his experience and take the inexperienced slugger into deep waters. However, the former world champ started with a prevent defense and never did anything but hold on. Dropped with a liver shot at the end of the first round, Quintana spent the rest of the bout in full retreat until a barrage of punches in the fourth round hurt the veteran.

To his credit, Thurman closed the show well and never allowed Quintana to regain his composure.