It does not take a Ph.D in psychology to know that when someone is forced to live against type, either by circumstance or exploitation, that’s a recipe for crushing depression and ending up dead on railroad tracks. We have a deep, innate drive to be what we are, often to the detriment of our place in society. 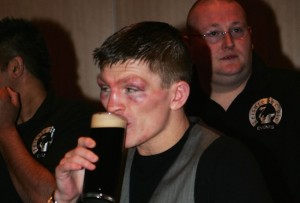 I thought of this as I watched Ricky Hatton get the shit kicked out of him by Vyacheslav Senchenko last week. Sure, Hatton (who I refuse to call “The Hitman” on the grounds that he is no Thomas Hearns) was ahead on the cards, albeit headed to a likely split decision loss if he got up from the body shot that ended his comeback, but even Hatton himself has admitted that his heart simply was not in the fight by that point. It was a classic case of a guy who should have stayed retired getting an object lesson in that fact in front of a worldwide audience.

Except Ricky Hatton had his soul cleansed.

After the knockout loss to Manny Pacquiao in 2009 that ended Hatton’s career the first time, the Brit went into a downward spiral of truly frightful proportion, with substance abuse and depression taking its toll on the man. Hatton had gotten himself right, kicking the worst of his personal demons…but no wresting of the monkey from one’s back is complete without finishing the bit of unfinished business that touched off the spiral.

Ricky Hatton could die tomorrow, and he would die in peace. Putting an honest account of himself into the ring, coming back to the point where he was in shape and physically at his best if too rusty and dispossessed of fighting spirit to complete the task, Ricky Hatton can go out far more respectably from the sweet science than he did at the hands of the Philippine legend three years ago.

So it goes with athletes far and wide. We may choose to forget Michael Jordan’s laughable comeback with the Washington Wizards, but the fact remains that Jordan still had something left in the tank when he left basketball behind, still only 34 years old, after “The Last Shot” in 1998. That retirement wasn’t an adventure in baseball (or, if you believe Bill Simmons of ESPN’s favorite NBA conspiracy theory, a gambling suspension by NBA commish David Stern), it was a farewell to the sport as a player.

Watching someone else do something you know you can do yourself is the greatest of temptations to enter (or, in Jordan and Hatton’s case, re-enter) the sphere. Especially in the talent-poor interregnum between the Bulls dynasty and the rise of LeBron, it is hard to imagine Michael Jordan watching basketball without thinking “I could kick those guys’ asses every night and twice on Sunday.”

When Jordan came back, when he passed forty and when he couldn’t bring the best night after night, only then was he able to finally hang up the high-tops for good.

If I may be indulged a personal aside, I was recently fired from a retail job, and the circumstances were remarkably instructive for being true to myself. On the infamous “Black Friday”, I’d made some offhand remarks about how I was hoping for mayhem and combat in the aisles. My position here at the Tribune is a matter of public record (it’s on my resume for every job to which I apply). It doesn’t take a big leap of logic to know my intentions—I wanted to see mayhem so I could write about it and sell the article to the highest bidder (or just have Gawker publish it for free so I could add “published by Gawker” to my curriculum vitae).

The store manager noticed, calling me into her office and giving me a multi-layered speech about all the fire-able offenses I’d committed simply by showing up and tipping my hand. Besides violating the company policy on conflict of interest (my goals were directly at odds with the store manager’s goals of having a safe, profitable, lawsuit-and-injury-free Black Friday), she also used the moment as a suitable excuse to invoke the workplace violence policy (wishing ill upon a customer is, apparently, equivalent to threatening that customer directly) and cite me for “severely damaging the brand”. Massachusetts being an at-will employment state, that was three more reasons than she needed to fire me, so out the door I went.

The moral of the story? Well, think of it as Hatton in reverse. Taking a retail job “to support my writing habit” is committing 30 hours a week to doing something other than writing, and doing it for barely over minimum wage, ensuring that the money required to finance the wealth of experience (and boxing pay-per-views) necessary to write well never materializes. I’m not Jacob Riis here, except maybe when I’m revisiting the “In Praise of the Palookas” theme. The best piece of writing (not necessarily the best boxing article, but the most literate piece of long-form) I ever wrote was “Right Where I Belong” (Southpaw #43), which came from a good $200 out of my own pocket for bus fare and a night in a motel.

The crushing depression of thinking “this is my ceiling; retail slave who writes as a hobby” made me want to go jump on the third rail rather than take the subway home. Subconsciously manufacturing my own demise at the root of the emotional problem was just the symptom. Seeing the Hatton fight brought that into focus.

I gotta go out on my shield. If my writing’s gonna go to shit, at least let it be because Paul decided that I couldn’t do it anymore and the readers took a powder in their exodus, leaving me the beaten man that Hatton was last week and that Mike Tyson was after Kevin McBride got through with him.

I watch guys like Hatton say “even if I fail, I have to do this” and think “what’s my excuse?” Thanks, Ricky. If you can draw praise for being true to yourself, ain’t nobody else in the world can use their own fear as an excuse.

Fox Doucette covers Friday Night Fights for The Boxing Tribune. His weekly column, The Southpaw, appears on Thursdays. Fan mail, hate mail, and good-paying jobs in writing or copy editing (provided you let me keep writing for the Tribune, because I ain’t leaving here) can be sent to beatcap@gmail.com. I’m for hire. “Full-time freelancer” sounds a lot better than “unemployed bum.”