This Saturday Manny Pacquiao and Juan Manuel Marquez get in the ring for the fourth time to close out a tight, hotly-contested series of battles: Here’s what The Boxing Tribune staff has to say about the upcoming contest:

What can Pacquiao and Marquez show us that we haven’t already seen? As I see it, not very much at this point. Both men have hit the slow downward slide of their respective careers and these two old dogs aren’t learning many new tricks. This fight will look a lot like the first 3; back and forth action and dramatic momentum swings. The mystery lies in the decision that will be read at the end of twelve rounds. I stopped picking against Pacquiao a long time ago, but my money is on 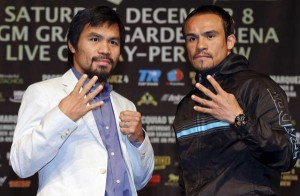 Karma to swing to the Mexican’s corner, finally giving Marquez the decisions he could have gotten in their last two outings.

It’s time for Captain Ahab to get his whale. Manny Pacquiao’s aura of invincibility has been punctured, his legendary penchant for getting judges to hew to his (and his promoter’s) wishes left in tatters, and the man himself simply does not look like the fighter he once was as he approaches his mid-thirties.

Juan Manuel Marquez is Manny Pacquiao’s nightmare scenario, a slick counter-puncher who can work angles and won’t walk himself  into anything from the Filipino. Marquez is also out for blood and will throw his punches with the kind of bad intentions that only a personal vendetta can provide. It will prove the difference as Marquez wins by tenth-round knockout.

Much as it pains me to write – Manny’s best days are most definitely behind him. That said, I was clearly very much in the minority in scoring Pacquiao Marquez 3 as a “pick ‘em” fight (I gave it to Pacquiao by a solitary round). Marquez is a remarkable advert for our sport, on all fronts, and I’d love to see him pull this fight out of the bag, even if a Marquez win would just about put to bed any hope of the Philippine dragging Floyd into a ring. I’m pretty sure that Manny no longer has the tools to deal with Mayweather anyway, and would lose that fight handily – so for me, Marquez takes a close, split decision and Pacquiao descends into full-time politics”.

Simply put, this is Marquez’s moment. While his rival is doing congress, singing, acting,  Juan Manuel still, at thirty nine, simply lives boxing 24/7. Marquez, having received a draw and two close controversial losses, will finally be the sympathetic fighter in this go round, likely earning him the nod with the judges in close rounds. Anyone who has seen the first three fights knows these two have nothing but close rounds. Unless Pacquiao lands a home run, which is unlikely against the Mexican’s iron chin, Marquez will use his master counter punching to control Pacquiao’s aggression as he has done in his better moments in the three previous bouts. This all leads to Marquez taking a close but clear unanimous decision and getting the win he has wanted for nearly ten years.

Their staunchest supporters can present a well thought-out, provocative narrative as to why their man will be victorious on Saturday night. These two warriors have records that are uncannily close – A reflection of their first three fights. By all calculations, figures and facts, Juan Manuel has all the tools to finally beat Manny. This weekend will mark the Filipino dynamos’ second defeat inside of a year (and will either be a catalyst to fast-track the Mayweather/Pacquiao uber fight or derail it completely) and there will be no controversy when the official particulars are announced. Mexico will finally have another win over the vaunted Manny Pacquiao and Marquez will finally have his redemption. Marquez by TKO8

The bottom line when it comes to Pacquiao and Marquez is that styles make fights, the boxing cliché has never been more evident than in the three close and controversial bouts these two have taken part in. Marquez’s counter punching style has always been perfect for meeting Pacquiao’s aggression, and that will be the case again this Saturday. Both fighters’ prime years are behind them and any slippage, however slight it may be, will have more of an effect on Pacquiao. Of course, we never know what fight the three judges will be watching, but I see Marquez having enough of an edge to win convincingly. Juan Manuel Marquez by split decision.

I have  Marquez ahead in this series, 2-0-1, but all were close battles and, unless something crazy happens, the fourth one will be close as well. Marquez nullifies Pacquiao like no one else ever has, but the effort also limits the volume and intensity of his own offense. Does he open up a bit more to gamble on a knockout or simply fall back on what he does best? My take is that Marquez, a cerebral fighter, will always fall back on logic over fire and the fight will be another close affair after twelve rounds. The difference is that enough stink has been made about the scorecards in the three previous bouts that one or two rounds may sway away from Pacquiao. This time, Marquez will be the one taking home a controversial split decision.