MGM Grand, Grand Garden Arena, Las Vegas, Nevada– Juan Manuel Marquez (55-6-1, 40 KOs) brought an abrupt and devastating end to his four-fight series with Manny Pacquiao (54-5-2, 38 KOs) with a brutal last-second knockout in the sixth round of their schedule twelve-rounder.

Before that closing overhand right that sent the Filipino icon  face-first to the canvas, however, all indicators were 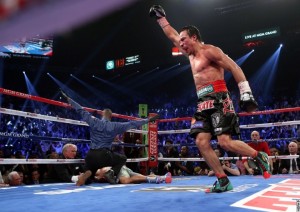 pointing to an ugly loss for Marquez.

With the exception of the third round, where Marquez sent Pacquiao to the canvas with a wide overhand right, Pacquiao was doing well. More active and aggressive than in recent fights, he was drawing Marquez off-balance with a nice feint and beginning to bang the Mexican up.

By the sixth round, Marquez was suffering through a broken nose and was beginning to be drawn out of his normal, well-contained mindset. The flow of the action was reminiscent of when Pacquiao began his move up the divisions and was taking everyone apart, piece by piece– but all of that abruptly ended with two seconds left in the sixth round.

Pacquiao would lunge forward, looking to score one final blow on a back-peddling Marquez, but would stumble slightly over his opponent’s lead foot and run right into a perfectly-timed overhand right. The end had come.

The eight-division champ fell face-first on the canvas, unconscious, and not requiring any sort of count. Worried supporters and a distraught Jinkee Pacquiao pushed their way to the ring, where Pacquiao would begin to come to his senses long moments after the fight-ending blow.

For the 39-year-old Marquez, a demon has officially been exorcised from his pugilistic soul and talk of “What’s Next?” can wait for another day.

When asked by a Mexican reporter about his thoughts when he saw Pacquiao wasn’t getting up, Marquez got serious for a moment amidst the celebration and said, “I was thinking of the times the judges robbed me.”

Yuriorkis Gamboa’s debut under 50 Cent’s SMS Promotions banner was a mixed bag. On the positive side, the Cuban talent scored two knockdowns en route to a one-sided unanimous decision over Michael Farenas (34-4-4, 26 KOs). On the down side, Gamboa (22-0, 16 KOs) also got sent to the canvas after a careless moment in the ninth round and suffered a cut on the inside part of his right eye.

It was obvious that ring rust played a part in Gamboa’s performance, after promotional issues put him on the sidelines for 15 months, but it also stressed 50 Cent’s tentative grasp on the boxing main stage with an erratic talent like Gamboa as the centerpiece of his fledgling empire.

As for the fight, itself, it was what could be expected of a Gamboa outing. Great athleticism, pound-for-pound flair, and just enough lunk-headedness to make his fans and supporters hold their collective breaths.

The native of Guadalajara boxed circles around his challenger, not coming close to losing a round on The Boxing Tribune’s unofficial scorecard. However, the three judges somehow saw Gesta winning some rounds and issued scores of 117-111, 119-109, and 118-110.

As expected, Fortuna took an early lead in the bout, but Ireland’s Hyland looked to be turning the tide in the middle rounds. However, he was never able to grind down the more athletic Fortuna and instead of owning the championship rounds, it was Fortuna who closed the show big.