What happens when you get a Friday night fight date at the Bell Centre but don’t have any competitive fights? If you’re Groupe Yvon Michel, which is promoting this Frirday’s collection of tuneups and mismatches at the Montreal Canadiens’ dormant-via-lockout hockey venue, the answer is you put on a show anyway and to hell with competitive fights. 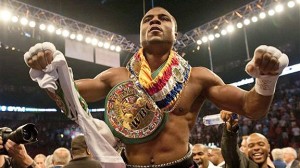 Headlining this sorry affair is Jean Pascal (26-2-1, 16 KOs), who gets a tuneup for his March title fight with Chad Dawson, as he takes on thrice-stopped nobody Aleksy Kuziemski (23-4, 7 KOs) in the nearest thing this card has to a main event. Kuziemski has done this dance before, with knockout losses to Jurgen Braehmer and Nathan Cleverly on his rap sheet. Most of Kuziemski’s wins have come against has-beens and never-will-bes; there has never been any indication whatsoever that he will give Pascal anything other than maybe a few good rounds before he gets stopped.

In the co-featured event, David Lemieux (27-2, 26 KOs), whose level of competition has regressed back to the level of early-round KO wins over complete bums after he stepped up in class and first got his ass handed to him by Marco Antonio Rubio on Friday Night Fights and then lost a majority decision that wasn’t as close as all that to Joachim Alcine, looks to add a third straight KO to his curriculum vitae against Albert Ayrapetyan (20-3, 9 KOs) of Armenia, whose greatest distinction as a fighter thus far is that it took Sergio Martinez 11 rounds to get rid of him. Ayrapetyan’s 20 wins are a pastiche of who-dats, tomato cans, and guys with massive losing records. The only question here is how long it’s going to take Lemieux, who, while he conspicuously lacks Sergio Martinez’s boxing ability, probably has more pure, raw power in his fists, to get rid of his patsy of an opponent.

Finally, and with a minor title (the NABO) on the line, we have prospect Eleider Alvarez (10-0, 6 KOs), who takes on another three-time knockout victim in Danny McIntosh (13-3, 7 KOs). McIntosh has been knocked out in his last two fights by Tony Bellew and Eduard Gutknecht, and earlier in his career ran into (funny how these coincidences always seem to show up on the same fight card) Nathan Cleverly. McIntosh is what he is; a fighter who loses to even above-average competition and feasts on hobos. For a guy like Alvarez, who GYM Promotions is bringing along as a future seat-filler in Montreal, it should make for an entertaining if brief show for the fans.

The card continues all the way down the bout sheet in the same vein, with one fighter undefeated and in the good graces of the promoter, and his opponent clearly in for the paycheck and the “merci beaucoup” that comes from willingly standing in front of a golden child and getting punched in the face. Carlos Manuel Reyes, Doel Carrasquillo, Laszlo Peczeli, Richard Voros, and Attila Tibor Nagy (great name, by the way), enjoy your moment in the boxing media spotlight. Anyone who loves a good underdog story will be pulling for you.

Fox Doucette covers Friday Night Fights for The Boxing Tribune. His weekly column, The Southpaw, appears on Thursdays. Fan mail, hate mail, and a little love for the palookas and tomato cans can be sent to beatcap@gmail.com.