Saturday night Jorge Arce (61-6-2, 46 KO) will march into the ring against the bigger, stronger, faster, younger, and more talented Nonito Donaire (30-1, 19 KO) at the Toyota Center in Houston, TX.  Many are applauding this as a great match guaranteed to produce action.  Someone has to ask the question.  At what cost will we pay for some action and a 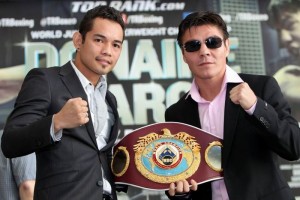 bloody knockout because, to be honest, Jorge Arce has about as much chance of not being destroyed Saturday as a child being lead into a Hunger Games-style arena against career tributes.

Last Saturday, boxing fans were treated to an incredible slugfest fought at the highest skill level when Juan Manuel Marquez stopped Manny Pacquiao in dramatic fashion after six thrilling rounds. The difference in that fight was that both fighters were at a high level and as evenly matched as two fighters have been possibly in the history of the sport.  This Saturday, that is not the case.

Filipino Nonito Donaire is at the top of the skill level chart.  He is a big, strong fighter for his weight class.  He has tons of skill that is being honed by a top trainer in Robert Garcia.  He is lightning-quick and capable of producing a one-punch knockout at any moment.  Donaire has all the makings of a great fighter.  Despite some saying he has fought soft competition in the past, he has certainly challenged himself against top opposition in multiple divisions.

Arce at his best was a decent action fighter capable of beating most and giving the top fighters a good challenge.  That best was at least five if not ten years ago.  It was more than three and half years ago now that he was beaten to a pulp by Vic Darchinyan and most thought it was time for him to call it a career.  Certainly, he has had some good fights since then and showed he can still beat most, but he is nowhere close to being a fighter capable of challenging someone like Donaire.

So, again we have to ask what the cost of seeing action and excitement is.  Send a small but intensely proud warrior like Arce into the ring against anyone and he will give everything he has and be willing to go out on his shield.  Send him in against a belt-holding pound for pound fighter and he will fight even harder.  So is that really a reason to have this fight, just because it will produce action for however long it lasts because you happen to have a warrior willing to put himself into the line of fire (or likely in the line of a left hook from Nonito that will knock him silly)?

Boxing at the top level on pay cable is supposed to be about action and well-matched competition.  It should be a case where even the best boxing experts struggle to pick a winner.  Especially in the main event of an HBO boxing broadcast.  Somewhere, though, this concept was blurred.  At some point it became okay to push a mismatch on boxing fans just because it will produce action.

Being frank, Arce is being lead to slaughter.  He is being tossed into an arena like a gladiator to thrill the salivating citizens looking for blood.  Those citizens can’t even make money off this mismatch it is so lopsided.  Current odds have that if you put a hundred bucks on Donaire you win a lousy twelve dollars.  That says something.  Actually it says a lot.  Bet a hundred to win twelve.  Vegas knows this is a joke, so why doesn’t the boxing world?