Future hall of famer Manny Pacquiao is truly worthy of his eventual place in Canastota. His accomplishments in the ring prior to his lightning-fast rise up from junior lightweight all the way up to junior middleweight – well, almost all the way up to junior middleweight – were probably enough to save his place in the hall. It is his fights dating back to his nine-round destruction of then-WBC lightweight titlist David Diaz that helped launch the fighting Congressman from 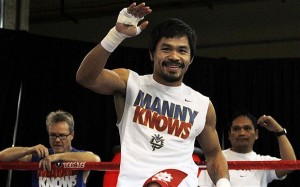 General Santos City to superstar status. But it is also his fights from David Diaz to Antonio Margarito that were presented with the greatest sleight of hand. We were only shown the face of the card, but to those who looked at the card from all angles could see the thin nature of the blocks that made up the house that Manny built.

Nevertheless, with a nation behind him and the best promoter in the business fueling the public relations blitzkrieg of the industry, the line between publicist and journalist was blurred as traffic-hungry writers sold their dignity in exchange for the sizeable bump in traffic that comes with writing Pacquiao-friendly articles. Millions of new boxing fans flooded the internet in search of anything related to their country’s hero. If the tone of the article was anything less than fall-down-and-pray flattering, the comments section would be flooded with poorly spelled and punctuated, hateful, and sometimes racist comments.

But where were these millions of crazed Pacquiao fans all seemingly congregating and organizing their cyber attacks on the boxing world? More importantly, how could one tap into this potential oasis of internet traffic?

The epicenter of the Filipino boxing world for the better part of the last decade has been located at Philboxing.com or MannyPacquiao.ph (MannyPacquiao.ph recently changed to PinoyGreats.com). Owner and Editor, Dong Secuya established one of the most powerful online presences where Filipino boxing fans and the brand new Manny Pacquiao fans could get all of their news in one convenient place. Pacland piggybacked on the Manny Pacquiao phenomenon, and sold its readers to the click-hungry journalists now populating the internet.

Quite possibly the most greedy and opportunistic of the penny-click media came from Examiner.com. In its infancy, the Examiner paid its citizen journalists a higher rate than is standard in the industry. A good portion of the Examiners, who are paid per click (penny clicks) made every effort to go after the Pacland readership while making almost no effort to hide the obvious slant with which they reported the truth.

And so the love affair between Philboxing/Pacland (now PinoyGreats.com) and the Examiners was born. It only seemed natural that those panning for pennies would dip into the deepest oasis. Guys like Michael Marley, Dennis “dSource”Guillermo, and Mark “Scoop” Malinowski have made a living documenting Manny Pacquiao’s every step; from training camp notes to his bowel movements and how many half-chewed pieces of rice and corn were in each one.

There was a time when a Facebook news feed or Twitter timeline would be littered with Manny Pacquiao minutiae. It was hard to escape the reality that a sizeable chunk of the boxing media was pandering to the lowest common denominator of Johnny-come-lately boxing fans. And those with their hands digging through the penny click trough made nice livings for themselves, but at a price for dedicated Pacland listings. According to Secuya, the examiner writers were willing to pay to play.

“Every Examiner writer on Pacland was a happy camper until someone informed me what’s going on. So I asked several of them to give me a cut from their earnings since most of their traffic came from my site anyway. I do need money to pay for the maintenance and servers for the site. All those I approached happily obliged (I hope) and we had good business going on for a few months,” Secuya publicly explained in a post in the Pacland forum.

The examiners knew the name of the game, and over time they got good at it. During a recent dispute over what “dSource” Guillermo felt was an article that was passed over for personal reasons, he made sure to point out that his article wasn’t “critical of Roach, and even made Pacquiao look like a victim.” This was in response to Secuya’s charge that the article was lacking a source and was critical of Roach and Pacquiao. The entirety of the email exchange between Guillermo and Secuya can be found in the Pacland forum archives. A second side of the story (if you have a Tagalog translator) can be found on Guillermo’s Facebook page.

Secuya maintains that it is not a standard policy to suppress news items that show Team Pacquiao in a negative light. Secuya told The Boxing Tribune that his reasons for not including Guillermo’s insufficiently-sourced article included not wanting a repeat of a past incident involving Freddie Roach making a death threat to former Philboxing contributor Alex Vidal over a false report claiming Roach was seriously ill.

As of late, the flood of Examiner articles has died down to a quiet stream. The once-undisputed king of Pacquiao pandering, Michael Marley has written only sparingly in recent months while, Guillermo has semi-retired from boxing journalism in favor of covering the NBA and painting on shoes for Nonito Donaire.

So what caused this exodus from the tireless effort to inform the world of anything and everything related to Manny Pacquiao?

The recent hissy fit thrown by Guillermo really helped shed some light on the disappearance of the Examiners, as well as confirm some of the assumptions about the relationship between Pacland and the Examiner crowd.

Secuya also informed the Boxing Tribune that no formal pay-to-play deals were made with Examiner writers. Rather, an undisclosed number of Examiner writers voluntarily sent an undisclosed percentage of their monthly income to Secuya for his services. A post from Secuya in the Pacland forum claims (in response to Guillermo’s public claim to have paid out over 100 thousand Philippine pesos) that Guillermo in fact did pay up to Secuya, and by his own estimations, made more than 900 thousand pesos from his Examiner earnings. The exchange rate between US dollars  (USD) and Philippine pesos (PHP) during the approximate time period of the pay-to-play deal was 1 USD for every 48 PHP.

Manny Pacquiao’s crushing knockout loss to Juan Manuel Marquez was a clear sign that the Filipino legend is at the end of the road, and the fawning publicists disguised as journalists have scattered in search of a new steady revenue stream. As several of us here at The Boxing Tribune have hypothesized, as Manny Pacquiao goes, so go the millions of fans who jumped onto the bandwagon when he rose to prominence in the sport.

With the lights flipped on in the kitchen, we get a good look at the cockroaches as they scurry out of the room and back into the shadows. We, as fans of the sport that will be here no matter who carries the torch for this sport, can only hope the phenomenon of Pacland and the retardation it wrought on the sport, doesn’t find its way back into the kitchen. Here’s to hoping that two years from now when we talk about Pacland, we’re talking about that cute little yellow guy who eats a little white pill and temporarily gains the power to eat ghosts.

In the interest of full disclosure, The Boxing Tribune has used Pacland to list articles in the past. We have not, however, paid for the privilege or pandered senselessly to an ignorant fan base with half truths, repackaged press releases, and outright lies. We report the truth at every turn, positive, negative, or neutral. We don’t hold back in fear of negative comments on our Op-Eds and nasty emails to read with our morning coffee. You can email Tim at timharrison65@gmail.com, or follow him on Twitter at www.twitter.com/TheTimHarrison.