The first (and so far only) women’s title bout of 2013 took place Saturday night in Mexico City, Mexico. The WBA bantamweight champion, Janeth Perez (17-1-2, 4 KO’s) defended against undefeated Irma Garcia (6-0-1, 1 KO, 4 NC). This was Perez’s fourth defense of the title she won in July of 2011 when she stopped Yolis Franco in the seventh round, for Garcia it was her first attempt at a title of any kind. 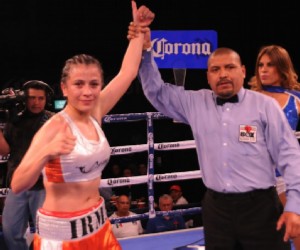 The first half of the bout saw Garcia box effectively, using her superior hand and foot speed to avoid the aggression of Perez. She countered the champions missed punches with three and four punch combinations of her own, and was able to move out of range to avoid Perez’s heavier shots. In the latter half of the fight, Perez managed to close the gap and have some success with her power shots, but she was still being out punched even though Garcia had slowed down a bit.

With no knockdown, and neither fighter ever being in serious trouble, except for a bloody nose on Garcia, the fight went to the scorecards after the ten round distance: scores of 96-94 twice and 97-93 awarded the WBA world bantamweight championship, in an upset, to Irma Garcia. TYC Sports unofficial scoring had the bout scored in the opposite direction: 98-92 for Perez, giving Garcia just the 6th and 7th rounds. The defeat snapped the undefeated record of Perez, while Garcia, who has been undefeated since a four bout stretch of no-contests in 2011 wins her sixth straight contest.

A female “mini-tournament” in Sturovo, Slovakia took place as an under card attraction Sunday night. The tournament saw Alexandra Gorog (3-6, 0 KO’s) defeat Gabriella Vicze (2-18, 1 KO) and Dalia Vasarhelyi (2-1, 0 KO’s) defeat Rita Kenessey (1-2, 0 KO) in the opening bouts. Vasarhelyi would take the win in the final over Gorog. All three bouts went the four round distances.

Believe it or not, no world title bouts scheduled in Argentina or Mexico this weekend.