This will likely be the least popular and least shared Monday Rant in a long while because it has to do with boxing fans and the double standard always at play when it comes to the sport.

When the boxing media acts as lap dogs and publicists, it’s understandable how fiction can be indistinguishable from fact and how reality, somehow, becomes up for debate. I’ve always said that in boxing, like in no other sport, fans need to be extra vigilant and extra sharp because they will never get the real deal in terms of honest assessments and fair analysis.

It’s not fair to the fans, who just want to watch a good fight, to put so much on their plate. Most fans, even the smartest and most informed, will simply go with the flow and buy into any angle that fits into their own particular leanings and biases.

The case of Gennady Golovkin is a perfect example of this.

And not only does he get the free pass, so many fans (and media) were sitting in wet panties prior to Saturday to see him defend his WBA middleweight title against a tough, but overmatched import from one division below, Gabe Rosado.

These same fans (and media), though, were beside themselves when the 22-year-old Saul Alvarez defended his WBC junior middleweight title against a tough, but overmatched import from one division below, Josesito Lopez.

Golovkin’s run as WBA champ is now six defenses deep since winning the vacant interim belt in a 2010 blow-out of the pedestrian Milton Nunez. Since then, Golovkin’s reign has taken him through Nilson Tapia, Kassim Ouma, Lajuan Simon, Makoto Fuchigami, Grzegorz Proksa, and now, Rosado. Of his seven “championship” bouts, only Proksa could be considered even remotely close to the top 10 at 160. This, from a fighter who essentially started the game on second base after a long and storied amateur career and an Olympic silver medal.

Alvarez’s run as WBC junior middleweight champ is now five defenses deep since a 2011 drubbing of Matthew Hatton for the vacant strap. Since then, Alvarez has defended against Ryan Rhodes, Alfonso Gomez, Kermit Cintron, Shane Mosley, and Josesito Lopez. Of his six “championship” bouts, only Rhodes and a rapidly-declining Cintron could be considered “legitimate.”

So, why the double standard? Why are two fighters who have traveled very similar paths treated so differently?

A lot has to do with the fact that Golovkin carries with him the farcical title of “Most Feared Fighter,” which generally gets passed to any offense-minded pug whose ability to fight far surpasses his ability to draw. In the case of Alvarez and guys like Chavez Jr. and Cleverly, it could be argued that it’s the opposite– They are fighters whose ability to draw got a head start on their in-ring execution.

But all of this is so, so relative. Relative to the point of being absurd. Golovkin has looked like a beast because he’s been in the ring with fringe contenders and club fighters disguised as world title challengers. Maybe he can do the same against the very best middleweights in the world, maybe not. Alvarez has been doing the same against a similar level of opposition. Yet, Alvarez is a punk and Golovkin is a BEAST.

Ideally, a boxer’s relative worth as a fighter should be based on what he has actually accomplished in the ring. The reality is that NOTHING in boxing works like that.

In boxing, rankings are slapped together by either corrupt sanctioning bodies or flip, self-serving media-types. Title bouts are often given to those least likely to win. And decisions don’t necessarily go to the winner.

Why do we expect the fans to be any less flawed?

Meanwhile, also on Saturday, in Villahermosa, Tabasco, Mexico….Deontay Wilder beat the crap out of your kid’s Shop teacher: 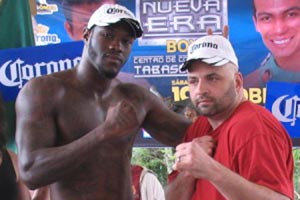 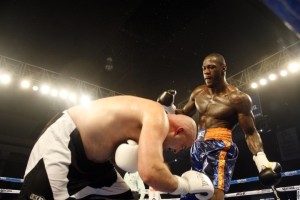 You can email Paul at paulmagno@theboxingtribune.com or read his upcoming scientific study on the correlation between excessive Twitter use and Gynecomastia. Paul is a full member of the Burger King Kids’ Club, a born iconoclast, and an ordained minister in the Universal Life Church.