Last week, we talked about Gennady Golovkin and how the man with zero wins against top 10 middleweights paved his way to middleweight pre-greateness and most feared man-beast status by devouring flat-lining journeymen and undersized pretenders.

A good fighter with great potential, Golovkin is very much the product of a boxing media with a burning desire to find the “next big thing” and a hardcore fan base eager to believe that hype. As a result, the legend of Golovkin has gotten far ahead of the actual reality.

This week, we talk about the real deal. A legitimately elite-level fighter in his division who can’t quite get his hands on a real championship fight. 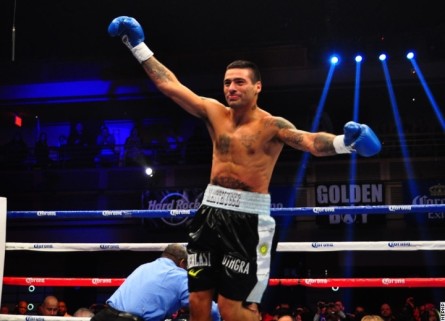 Saturday night, Lucas Matthysse ended his programmed mismatch with Mike Dallas Jr. on Showtime with a one-punch knockout in the first round. If the pre-fight storyline is to be believed, this will lead to his long-overdue first world title fight when he faces the winner of the upcoming Danny Garcia-Zab Judah bout.

If boxing were run like a real sport, Matthysse would’ve had his wins over Judah and Alexander and would’ve already made his bid for a world title. But we all know better than to expect logic and fair play from the sport we love.

It’s safe to say that if Golden Boy had not decided to treat Lucas Matthysse as a preferred client, he’d still be fighting Tae Bo instructors in Buenos Aires and losing dubious decisions to peck-and-run protected challengers on occasional trips to America.

Now, Matthysse is just one step away from where he should be and quickly getting the acclaim he has deserved for the last couple of years. In this case, the gushingly fem adulation of the increasingly metrosexual boxing media is 100% correct. Matthysse is the real deal.

WBA/WBC junior welterweight champ Danny Garcia was watching the Showtime telecast and giving his running commentary via Twitter. Up until the main event ring entrances, the champ remained defiant:

I’m ready for who ever!

Literally minutes after the first round KO, a rumor began circulating that Garcia would be pulling out of his bout with Judah.

The story would simmer overnight, breeding various takes on the situation and rumored reasons for the rumored withdrawal. By Sunday morning, an “official” story had been leaked to the Golden Boy-run RingTV outfit and to the promotional firm’s usual preferred regurgitators.

Garcia had hurt his ribs in sparring.  Apparently.

At some point, shortly following the ring entrances of Matthysse and Dallas and mere moments after telling the world to bring it on, Garcia became aware of his fight-threatening rib injury.  Apparently.

And then, within an hour of becoming aware of his fight-threatening rib injury, online boxing writers and dedicated Twitter jockeys suddenly became aware of it as well.  Apparently.

The story is now that Garcia-Judah, along with the Peter Quillin-Fernando Guerrero WBO middleweight title fight, is being moved to April 27.  Apparently.

Who knows, maybe there was a decision to keep the injury under wraps until after the Matthysse fight. Maybe Golden Boy wanted to use the growing Garcia-Matthysse rivalry as a selling point for Saturday’s otherwise piss-poor match-up. I guess that’s as believable a tale as anything else. It’s not like we’re ever going to get the real story, anyway. History tells us that nobody in the boxing media, not a single big shot, will be digging any deeper than his email inbox for the real story.

As for me….I don’t care. I’ve stopped caring about anything other that what happens in the ring. The bomb-throwing rabble-rousers here at The Boxing Tribune are not part of the cigar-chomping, ass-patting fraternity of buffet divers or it’s subclass of beard-stroking faux intellectuals. We don’t barter ass for access.

I just like a nice iced coffee, a beautiful lady at my side, and watching a good fight. Anything else is just mierda.

You can email Paul at paulmagno@theboxingtribune.com or watch for his upcoming line of boxing media action figures, complete with laminated press passes and kung fu ass grip. Paul is a full member of the Burger King Kids’ Club, a born iconoclast, and an ordained minister in the Universal Life Church.