Your columnist has had the pleasure of watching Mike Dallas Jr. (19-3-1, 8 KOs) fight on ESPN2 a total of four times, in which Dallas went 2-2 and by rights should’ve been 3-1 (Mauricio Herrera, who ought to change his ring nickname to “El Bandito” for his tendency to win robbery decisions, did not beat him fairly.) As Friday Night Fights regulars go, Dallas was certainly on his way to a lifetime achievement award. 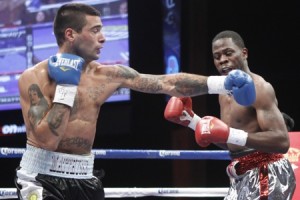 National television has a funny way of raising the profile of a fighter far in excess of his actual pugilistic merits, however. We’ve seen John Molina look good on ESPN; he got his ass handed to him badly by Antonio DeMarco when he got an undeserved title shot. We’ve seen Josesito Lopez look good on ESPN (including a knockout win over Mike Dallas Jr.); sure, he broke Victor Ortiz’s jaw with a punch, but when he stepped in against Saul Alvarez, the fight was a farce and a foregone conclusion. Ray Oliveira, Micky Ward, and Emanuel Augustus are practically the poster fighters for FNF as a complete series; none achieved mainstream success. Yeah, Ward put on great fights against Arturo Gatti, but he lost two of them, and the one time he fought for a world title, Vince Phillips smoked him. Oliveira fought unsuccessfully for world titles twice before the FNF days, and Augustus racked up 34 pro losses while spending most of his career as a gatekeeper known for his entertaining style if not his talent.

Mike Dallas Jr. seems to have landed on that particular treadmill. Lucas Matthysse absolutely kicked Dallas’ ass last Saturday night, scoring a knockout in a single round and demonstrating beyond controversy that the Lopez stoppage was not a fluke but an indictment of Dallas as a fighter. No matter how far removed a fighter gets from a devastating loss, that loss sticks around not only in the ring announcer’s “…against ___ defeats, with ___ of those victories coming by way of knockout” spiel but psychologically as well. When Don George got destroyed by Francisco Sierra on FNF, your columnist put George onto his permanent “never going anywhere” shit list (and with losses to Edwin Rodriguez by decision and Adonis Stevenson by one of Stevenson’s patented delicious knockout specials, your columnist got that one right.)

Mike Dallas seems headed into that kind of territory as a fighter. Lucas Matthysse not only exposed Dallas’ existing weakness, he opened up a whole new can of worms when he deposited a fresh batch of tau proteins and self-doubt into the brain of the beaten gladiator. From the point of view of Mike Dallas as a contender, this was Caesar commanding a death at the end of a gladiatorial combat gone wrong.

This brings up a bigger question. ESPN does not have a great track record as a springboard for champions. Sure, they’re occasionally a stopping point, a sort of hello for guys who are headed for much bigger things in life but are at the four-rounder stage of their careers (Guillermo Rigondeaux, looking at you.) Other times, they’re a sort of down-on-the-farm sideshow for entertaining guys whose careers are obviously not going anywhere anytime sooner or later (Ji-Hoon Kim, for example.)

But when ESPN gets cuddly with a promoter or manager and starts pushing the crap out of a fighter? That’s when we should all be worried. They did it with Yordanis Despaigne; Ismayl Sillakh put a quick end to that sort of talk. They then tried to run with Sillakh; Denis Grachev earned a paycheck with Lucian Bute from ESPN’s folly. ESPN’s love affair with Demetrius Andrade has given your columnist two years of opportunities to be a dick in print for fun (thankfully, Andrade seems to be Showtime’s problem now). Hank Lundy, gods bless him, is going to have to beat someone on the Molina/Raymundo Beltran level before he gets serious traction as a title contender. And David Lemieux? At least Teddy Atlas had Lemieux pegged right, consistently reminding viewers of Lemieux’s poor quality of opposition and seeming cluelessness about what to do if his power didn’t get rid of an opponent, something the alert viewer did well to remember (if Atlas’ constant crowing about it didn’t remind them) in the Marco Antonio Rubio fight.

LeBron James never played in the NBA D-League. Greg Maddux charged through baseball’s minor leagues like it was naught but tradition and roadblocks keeping him from a Hall of Fame career. Show me a guy who’s going to Canastota after becoming an FNF regular past the point in his career where he needs a TV fight to introduce him to the kinds of people who can get him a money fight as part of a pay-per-view.

This creates an interesting sort of working class in the fight game. Hank Lundy and David Lemieux and Ruslan Provodnikov are fun to watch, but they will never be world champions. You could make good cases for ESPN fights as Fight of the Year some years (Micky Ward-Emanuel Augustus in 2001 and Pawel Wolak-Delvin Rodriguez I in 2011 were pretty solid picks by any standard.) The show is great entertainment. But at some point, you have to see a guy like Mike Dallas Jr. showing up on FNF for the third or fourth time (especially if he’s already lost at that level) and write him off as a champion, don’t you?

Still, boxing is boxing, and sometimes a critical flaw or weakness is the stuff that spectacular televised knockouts are made of. Not a bad thing to be the Worldwide Leader in as regards the Sweet Science.

Fox Doucette covers Friday Night Fights for The Boxing Tribune. His weekly column, The Southpaw, appears on Thursdays. Fan mail, hate mail, and “you mean like the guys on The Contender?” can be sent to beatcap@gmail.com.