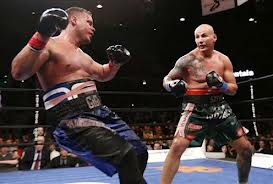 Those thoughts came to mind after last Friday’s Internet special following Friday Night Fights. After an absolute snoozer of a TV broadcast, in which Jose Luis Castillo and Cory Spinks brought a lot of star power into two dreadfully boring fights, fans who had the good sense to tune to ESPN3.com for a special heavyweight fight between Artur Szpilka and Mike Mollo got an old-fashioned Pier Six brawl that was long on action if horribly short on skill.

After the fight (and after I wrote my recap), I posed the question to my Facebook audience of “is an off-air eight-rounder eligible for Fight of the Year consideration?” I contend that Szpilka-Mollo was the single most entertaining and enjoyable fight I’ve watched on the Worldwide Leader since Wolak-Rodriguez I. Mike Mollo fought with the heart of a lion, winning over the audience like he was Stallone in Rocky IV, and fighting like nobody’d told him he was the designated fall guy.

You see this a lot on FNF. In swing fights and eight-round co-features, in showcase fights where a house fighter with some severe flaws hasn’t faced competition good enough to expose those flaws yet and isn’t about to, in cases where you’re sure coming in that the fight’s going to be duller than a special-ed dropout and it turns out to be a slugfest. Some fighters who are barely above the level of strip club bouncers step into the squared circle and just whale away at each other until the final bell rings or one guy lands a clean shot and sends the other guy to dreamland.

Your columnist loves palookas, tomato cans, slappies, journeymen, gatekeepers, whatever you want to call them. The lunchpail guys who seem to have records like 13-4 with 12 KO wins and 3 KO losses, the guys who only go the distance when the guy in front of them prefers to cuddle rather than fight, for better or worse.

Artur Szpilka is a palooka. He’s not permanently one, not yet anyway, but any halfway decent fighter would mop the floor with him, and he needs to work on his major flaws in the gym (he can start by not pulling straight back with his hands down.) Szpilka is short on skill and long on action and gets taken out of his efforts to be the boxer rather than the puncher far too easily.

Mike Mollo is a palooka. He is permanently one, to the point where he is what he is. He’s a toughman masquerading as a boxer, a guy who will never win even a credible regional title. After his fight with Szpilka, someone suggested getting him in with Kimbo Slice, both as a means of showing the world what a chump Slice is and by way of getting two guys from the “swing away until one falls down” school of action fighting in the same ring.

Was it the Fight of the Year? OK, that’s grossly overstating the point. The fight was for no real stakes, and as much as the two knockdowns of Szpilka set against the backdrop of an idiot referee making the fight way too hard for Mike Mollo as if he were fighting a tag team (seriously, Celestino Ruiz, you suck) may have made for very compelling viewing, Corrales-Castillo or Morales-Barrera it was not.

Paul carried the argument by pointing out that those two fights (as well as Ward-Gatti) were what they were precisely because there was actual fighting skill involved to make the fights of a higher quality than what they would have descended into had either or both guys in each fight been bums.

Furthermore, we’re going to see in two weeks a main event that stylewise promises to be something far better than Szpilka-Mollo in the form of Lamont Peterson doing battle with Kendall Holt. If Holt is washed up, the fight is over in three, but if he has anything at all left, the guys at the controls of the CompuBox machine might be forced to say “no mas” as the punch counts move faster than the eye can see.

If indeed palookas can put on great scraps, they have nothing on the real professionals fighting for a major world title. But hot damn. If every swing fight was as good as that little sojourn on ESPN3 was last week, boxing would be a sport with a whole lot more fans.

Hats off, Mike Mollo. You just earned yourself a feature. It was a pleasure to watch you fight.

Fox Doucette covers Friday Night Fights for The Boxing Tribune. His weekly column, The Southpaw, appears on Thursdays. Fan mail, hate mail, and more jabber from the Polish contingent that jumped down my throat last week can be sent to beatcap@gmail.com.