Two-time WBO heavyweight titlist, Herbie Hide, made headlines for the first time in about three years of professional inactivity when he found himself the subject of an undercover investigation by The Sun newspaper in Great Britain.

The 41-year-old Nigeria-born Brit reportedly made several attempts at arranging a fixed fight with a pair of reporters posing as businessmen looking to arrange some fights in the Middle East. 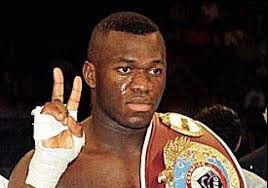 Over the course of a series of recordings, Hide would assure the men that he could fix any fight they wanted and that, for the right money, he could even make himself part of the deal.

“Boxing is not like what you think. It’s a business,” Hide told them. “If you’re talking about somebody to lose a fight… there’s got to be big money involved. Like me. You want me to lose? Who do you want me to lose to and for what?

“What you want to do is simple, yeah, is to see who the favourite is and get the favourite to go down in the round you call. It will be arranged.” He continued: “You need to speak to two boxers. What I’m saying to you is that can be done. If you put a million pounds, you’d be able to get either boxer to do that.

“I can guarantee you one thing, you can get whoever is the favourite, you can get them to step down for a million pounds. Whoever, which round you want.”

During the same meetings Hide also reportedly arranged for his personal cocaine dealer to deliver product to the reporters at “£100 a gram.”

Police are currently investigating these allegations and a statement has yet to be made from Hide’s people to explain his side of the story.

The reports, however, paint a picture of a fighter desperate to maintain a lavish lifestyle with some quick cash from any possible deals he can make, legal or illicit.

Allegations of fight fixing are not exactly a rarity in boxing and have been the sport’s dirtiest little secret since the early days of prizefighting. Recent unproven allegations have circled around fighters such as Jorge Arce and Marco Antonio Barrera, but nothing could ever truly be confirmed with either fighter. The Hide story is one of those rare pieces that, apparently, comes along with actual concrete evidence of efforts to arrange for a fixed fight.

Hide (49-4, 43 KOs) is best known for high-profile losses to Riddick Bowe and Vitali Klitschko, but also held a 4-2 record in world title fights with wins over the likes of Tony Tucker and Michale Bentt. In 2004, Hide dropped down to cruiserweight, where he would enjoy a 14-0 run before drifting off into inactivity after an April 2010 bout.