For some time, the theory has been that Adrien Broner’s only real problem may be contained in that area of his body above his man-groomed eyebrows and right below where his dad brushes after every fight. Recent proposed boxing decisions may prove that theory correct.

The WBC lightweight champion and Golden Boy Promotions have paved the way for a possible try at Paulie Malignaggi’s paper-thin WBA welterweight title as soon as this June. The challenge, confirmed by Malignaggi as a possibility, means that the talented young fighter, already receiving main stage play by cable networks and media, would be taking a flying leap over the jam-packed and supremely dangerous junior welterweight class. 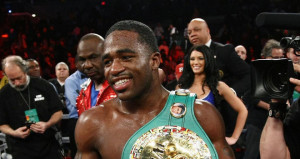 The 23-year-old Broner can’t be blamed for skipping out on lightweight. The only money fight to be made at 135 is against Scotland’s Ricky Burns and that would likely require a trip to the UK and a side battle with promoter Frank Warren, who is almost pathologically protective of his stars.

Promotional turf wars between Golden Boy and Top Rank likely mean that the Golden Boy-promoted, Al Haymon-managed Broner may never be allowed within sniffing distance of Top Rank junior welters like Brandon Rios. But, Rios aside, the division is bursting with talent, all conveniently signed under Golden Boy’s golden umbrella.

Bouts with Danny Garcia, Lamont Peterson, Lucas Matthyse, and Amir Khan could help turn the young talent from the next Mayweather to another Mayweather and pave the way to top pound-for-pound honors. Junior welter also boasts names like Zab Judah and a host of other solid contenders. The division is a building ground for greatness and Broner, as skilled and as talented as he is, would stand a good chance of running that world class gauntlet successfully.

But Broner doesn’t seem all that interested in the hard road to glory. From all indications, he wants to skip right over that den of vipers and walk into the historical glamor division of 147.

Shane Mosley made that same move from lightweight to welterweight in 1999, but was fighting a prime Oscar De la Hoya within a year of the jump. It’s hard to imagine “Baby Bro” moving from Malignaggi to Mayweather or Pacquiao in twelve months. Provided he gets by Paulie, fans would likely be treated to Broner against Devon Alexander or Marcos Maidana in any welterweight run as champion– Hardly the types of bouts upon which a legend is created.

Part of the problem with “The Problem” is the sense of entitlement he has carried with him ever since winning his first championship trinket.

A loss to Daniel Ponce de Leon was magically scored as a win. An unwillingness to make weight, or even try to make weight, resulted in opponent Vicente Escobedo having to walk face-first into a slaughter against a significantly larger man bursting with energy and strength from never having to dry himself out for the bout.

All of this has informed Broner that he’s already the star of the show, already entitled to diva treatment and automatic fan deference. And hanging with Floyd “Money” Mayweather has not helped the psyche of the young fighter.

Mayweather, the five-division world champ and current pound-for-pound top dog, lives a comic book lifestyle, surrounded by yes men and professional hangers-on. He has the money to satisfy his every adolescent whim, so he does. Whether he chooses to throw hundred dollar bills at five dollar strippers in Denver or opts at the last minute to catch a basketball game from courtside in Miami, Mayweather has become the poster boy for ADD self-indulgence.

But “Money” Floyd has earned the right to feel entitled. He has fought his way into being in a position to stupidly piss away his money. Mayweather put in eleven hard years as a pro before becoming a cash cow and living accordingly. He fought his way past a collection of hard-nosed battlers before becoming part of boxing’s richest pay-per-view and then moving on to become a guaranteed box office hit.

Broner is just beginning to dive deeply into that type of lifestyle. Hanging around with Mayweather at this stage of the game will not bring the kid back down to Earth. Instead, expect more and more craziness to ensue.

There’s no doubt that, in Broner’s head, he’s already the next “Money.” And if he’s already on top, why deal with guys like Garcia, Matthysse, Peterson, Khan, and Rios? His mere ring presence should be enough to keep him rolling in dough.

But that’s not how boxing works.

For all its problems and stupidities, boxing still demands a narrative. One fighter, working his way to the top and defeating all challengers until he’s at his throne. From there, things often get whacky and fighters begin to get picky about who gets to fight them. But, generally speaking, the ride to the top is where the legend is made and where fans decide who gets the respect and who gets the stink face. The superstars wind up making the big PPV money, but only after being thoroughly vetted by the buying public.

Broner has learned how to act like a star and how to play the role of “the next big thing.” He’s a relatively fresh face on the scene, so this will last awhile. But, eventually, even the less-than-discerning boxing fan will demand more from him than what he has given. Being a young fighter who kinda looks like and acts like the current best fighter in the world won’t be enough.

Right now is the time when Adrien Broner needs to roll up his sleeves and get some real work done. There’ll be plenty of time to act like a superstar when he actually becomes one.