Welcome back to another edition of Broken News, the one column dedicated to gathering up some of the bigger news stories of the week and giving them to you all in one big dose, albeit with my own cynical take on them. So without further ado, here is this week’s news. Some of it might be new. Some of it might be old. But all of it is broken.

Go back to last Thursday and ask 10 people if they know of former BBBofC English light welterweight titlist, Curtis Woodhouse (17-5, 11 KOs), and 9 out of 10 would be stumped. Ask that same question today and you’d get a much better response. Woodhouse, 32, recently went all Liam Neeson (watch “Taken” if you have no idea what I’m talking about) and tracked down a Twitter troll who spent the weekend giving him a hard time about his Friday, March 8 loss to Shayne Singleton. Several harsh taunts from the troll prompted Woodhouse to set out to find him and issue a right lashing.

After offering 1,000 British Pounds as a reward to anyone who could provide a name and address for the man known to him only as “Jimmy”, (at)jimmyob88, or “The Master”, Woodhouse announced he was coming for a visit. I’m sure few, including “The Master”, took him seriously. By the time Monday had rolled around, Woodhouse was live-tweeting his trip down to confront “The Master”, known then as Jimmy O’Brien. O’Brien drastically changed his tone, claiming the whole thing was a joke and he didn’t think Woodhouse would take it seriously.

There’s nothing worse than an internet tough guy lobbing insults out at anonymous sporting figures performing for their entertainment. One would be hard-pressed to find someone who hasn’t come across an internet tough guy. I’m sure at one point we’ve all come across one, or at least witnessed one making himself feel better from behind a keyboard in mom’s basement. On one hand, this is a great story of a guy going out of his way to silence a keyboard warrior. On the other hand, it gives anonymous, pimple-faced and doughy losers an instant shot at quick fame.

BoxingScene.com is reporting that the World Boxing Association (WBA) has set a deadline for a fight between its two heavyweight champions – Wladimir Klitschko, the recognized (“Super”) champion, and Alexander Povetkin, the paper champion toying around with the “Regular” title. BoxingScene cites a source at Sauerland Events (Povetkin’s promoter) as its only source. At the time of publication, the WBA did not respond to my request to confirm or deny the report, and no news of the deadline was on the WBA’s website. 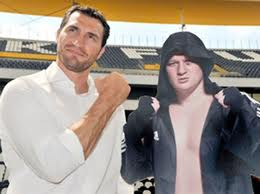 Klitschko is set to defend his titles (WBA, IBF, WBO) against Francesco Pianeta on May 4, with Povetkin’s next move still undecided. According the BoxingScene’s source at Sauerland, the deadline has been set for August 31, meaning the turnaround time for Klitschko would be rather short, while it leaves Povetkin with his hands tied regarding an interim fight.

That is to say, anyone actually believes the deadline is something all parties will be beholden to. Keep in mind that the WBA has gone on record as saying it has no problem with three champions in any given division, and in December they issued a February 26 deadline that they easily let slide. Both Klitschko and Povetkin make a healthy living with their TV deals in Germany, and it would be quite a financial windfall for the WBA to lose out on either man’s sanctioning fee.

David Haye has been bandied about as first in line for the winner between Klitschko and Povetkin. Does anyone else smell an “Interim” championship bout coming around the corner?

A Dose o’ Their Own Medicine

I don’t have much of a Twitter presence, and I couldn’t care less. Of my 1,080 or so followers, there are a handful who will ReTweet my links, respond to my observations during fights, or respond to an inappropriate joke with an “LMFAO!!!”, or “ROTFLMFAO”. I’m not on it much, unlike some of the more pompous asshole boxing scribes out there, I’ve got things to do other than stroke my ego and prick with the words of strangers I probably won’t ever meet. But I do get on and read to help fuel the fires of disdain for humanity that burn deep inside, and I notice a lot of childish rumor mongering amongst those who allegedly champion integrity, honesty, and journalistic virtues.

Recently I saw one particular enemy of the Tribune (Gabe Montoya) hinting at PED use by Bernard Hopkins in the wake of his once again becoming the oldest man to ever win a world title. “Not as far as I know. IMO, Hopkins sounds like [Lance] Armstrong, declaring himself clean. Did anyone ask? Why bring it up?” he replied to a Twitter user who asked if Hopkins had ever been tested by USADA.

He would bring the subject up later in a response to talk show host Jim Rome. “Saying ‘I’m clean’ is not the same as proving it like (at)filipinoflash Nonito Donaire doing (at)VADA_Testing. Without tests, just words.”

Montoya, with his subtle comparison of Hopkins to Lance Armstrong, has hinted at the use of PEDs by Hopkins. With no evidence to begin to make such a connection, and only a hunch, the allegation has been made publicly. He covers his ass with the use of three little letters, however: IMO, which in this case stand for “in my opinion”. You may remember I pointed to Montoya’s use of punctuation in his efforts to smite Angel Hernandez (Heredia), a rival of Victor Conte (both are strength and conditioning coaches/nutritional advisors (call them what you will) with checkered pasts involving steroids and other PEDs). Now, in his efforts to besmirch the achievements of a 48-year-old man who uses intellect to beat men half his age, he’s hinting at PED use. I understand how we’re almost operating in a “guilty-until-proven-innocent” sporting culture, but this is getting ridiculous. It doesn’t take a genius to see how much Hopkins has slowed and it’s his mind that keeps him winning at this late stage. And I know I wasn’t the only one to see that Cloud was the perfect style mismatch for Hopkins (although you’d have known if you read my preview), but when one is so blinded by agenda, the truth is secondary.

A while back Montoya sidled up to Victor Conte, the man behind BALCO and its insidious presence in baseball’s steroid era. The two have been cyber-inseparable ever since. Montoya was even idiotically photographed at the Sergio Martinez-Julio Cesar Chavez Jr. press conference in a “BALCO Gear” t-shirt (really…I saved the picture). Since partnering with Conte, it is hard to tell where Conte ends and Montoya begins.

Victor Conte is the same guy who bragged about being able to beat any doping test, and he helped develop the Voluntary Anti-Doping Association’s (VADA) testing protocols (working, of course, as an independent contractor). Victor Conte works as a “nutrition advisor” for Nonito Donaire. It was originally believed he was Donaire’s strength and conditioning coach, but “nutrition advisor” is what the common response is these days. Donaire is allegedly being tested 24/7/365 under the supervision of VADA. Conte and Montoya continually harass fighters about signing up for VADA’s 24/7/365 testing program.  When Andre Berto and Lamont Peterson tested positive for PEDs last year under VADA testing, it was (you guessed it) Montoya to break the news. Conte and Montoya have used every opportunity to trash USADA. Montoya has written several pieces on how great VADA is and how Victor Conte is reformed and he’s staked his career on Conte, ad nauseum. He sends tweets to athletes telling them their stance(s) on PED reform are empty and meaningless if they aren’t using VADA 24/7/365.

So, in wrapping up this long diatribe (and the statement of facts in the previous paragraph) , I will say; based on the facts laid out in the previous paragraph, in my opinion Gabe Montoya is acting a lot more like a publicist for VADA than an impartial journalist. In my opinion, his constant campaign to tear down USADA and bring VADA to the forefront of the anti-PED movement smells like a guy with a vested interest in one side over the other…in my opinion. See what I did there?

And still, some people wonder why The Boxing Tribune stands for a media independent from the influence of money in boxing.

Nothing stated herein should be construed as an allegation of any wrong doing. It is merely illustrating the power of (my) opinion mixed with the pointing out of factual associations and/or partnerships between Conte, Montoya, Donaire, VADA, etc. IN MY OPINION, it smells like shit (see…I did it again!), and our readers will be smart enough to draw their own conclusions, based on the facts and independent of MY OPINION. You can email threats to Tim at timharrison65@gmail.com (any and all harassing emails on the matter will be considered on the record and subject to publication), or follow him on Twitter and be bored to tears by his thirteen weekly tweets at www.twitter.com/TheTimHarrison.