What I’m about to do in this week’s Rant is something truly revolutionary. A huge step forward in reshaping the sport we love into a fair, balanced, and fully transparent business model. I hope it’s received by the boxing media in the spirit with which it’s intended. But, please, bear with me for a few moments while I set the stage. 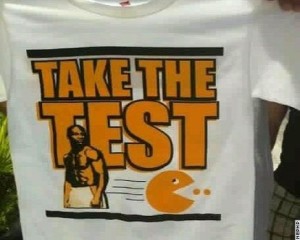 The problem is in how to implement it, how to create a system that is, actually, a system.

If I were a media whore, desperate to find my “thing,” I really wouldn’t care about all the pesky little details. Just spill the beans on a couple of cheats, impose my bloated ego on the issue, and act like everything I know hasn’t been surgically implanted in my rectum by born hustlers and PED cheats who have now “moved to the side of the angels.”

If I only cared about my stalled career and my brand, life would be really easy. Just Tweet the whole day away, content in the fact that I’ve wedged myself into the PEDs narrative enough that a certain amount of the boxing fan base will think of my name when the issue pops up.

Face it, this world of boxing is amazingly simple when all you care about is your own hustle.

Unfortunately, I was raised with a conscience and without the benefit of being tutored by the League of Professional Buffet Divers. I was never mentored in the art of douchebaggery by a grand poobah of glad handing.

So, to me, getting the right system in place is just as important as the actual process of testing, itself. And, no, leaving it all in the hands of the promoters and fighters is not reform. Not by a long shot. In the history of mankind it has never been very productive to leave the kids in charge of the candy store.

As long as PEDs testing is purely voluntary and done on a pay-per-play basis by testing agencies, nothing has really been accomplished. It’s just feel-good back-patting while pushing papers from one side of a cluttered desk to another.

Honestly, the prospect is painfully bleak when it comes to any sort of real, lasting PEDs reform.

But, in the spirit of PEDs testing, there is something the media can do to help clean up the sport from their end of the game. And it doesn’t require help from stubborn state commissions or deceptive boxing promoters. It doesn’t even require any lab work.

What I’m proposing is that all boxing writers and members of the boxing media fully disclose who pays their bills, where that money comes from, and any favors granted that may have them in debt to any promoters, managers, publicists, or fighters. I also propose that all major boxing sites open their books to similarly show the sources of their operating budget.

Why is this necessary?

Because, just as performance enhancing drugs affect a fighter’s ring performance, so do conflicts of interest affect a media member’s ability to be honest and fair.

The media is the only line of defense between boxing’s power brokers and the fans (and, often, the fighters), so why should we not know who may be pulling the strings of boxing’s biggest voices? Why is it not in the sport’s best interest to ensure that honest reporting is not confused with sponsored agendas?

It’s no secret that all of the major sites are owned, co-owned, or at least partially funded by promoters and/or managers (with the possible exception of mainstream sites like ESPN and Yahoo!). It’s also common knowledge that many of the industry’s biggest names have actually worked for those they are now asked to cover impartially.

Is it a coincidence that a scribe who goes on sightseeing junkets with Top Rank brass just happens to produce a lot of pro-Top Rank buzz? Maybe so. It could be a coincidence, but shouldn’t the fans have the right to know some of the history behind the written word?

Some in the media feel the need to constantly point out Ring Magazine’s status as a Golden Boy property, but they’re strangely silent about their own sugar daddies. Everybody knows that Ring Magazine has its conflicts, but the conflicts not so obvious to the naked eye are much more troubling.

The Boxing Tribune will gladly take this test of integrity. 100% of our operating budget comes from independent ad revenue and we do not accept advertising from active promoters, managers, or networks that air boxing. Simple.

Now, let’s see who else is honest enough to take the test.

Boxing fans deserve a clean media. Only those media-types who take the test can truly be judged as honest. Let’s see who really feels that boxing should be 100% clean.