In the main event, Donovan George (24-3-2, 21 KOs) outworked veteran David Lopez (41-13-1, 23 KOs) over ten rounds in a super middleweight contest, winning seven of those frames on The Boxing Tribune’s unofficial scorecard and eight on the FNF Facebook fan scoring app, only to hear a draw declared at the end of the bout. 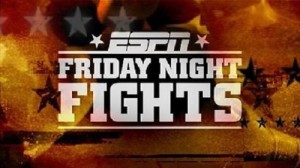 George dominated the early rounds, completely outworking a slow and listless Lopez, who was doing little more than avoiding damage. By the middle rounds, though, Lopez was managing to throw some counters behind the slipped punches and even managed to buzz the flat-footed George on one occasion.

But Lopez’s offensive surges were few and far between and, by the end of the contest, George had once again regained full control. After the tenth round, the reading of the decision should’ve been a mere formality. It was a clear and decisive victory for George.

Unfortunately, two of the judges must’ve been watching movies from their laptops at ringside instead of watching the fight. Judge Mike Fitzgerald somehow scored a 95-95 draw while Mauro Di Fiore insulted the viewing public’s intelligence with a 97-94 call in favor of Lopez. Judge John Epperson would be the only one to score the bout for the rightful winner, issuing a still too close 96-94 score for George.

While the bout was a letdown in terms of action and neither guy really made a case for himself as a main stage fighter, George deserved the win and was screwed out his victory by two utterly inept judges.

In the poorly-judged welterweight co-feature, a putrid 97-93 score from judge John McCarthy and an inept 95-95 call from Robert Hecko took a clear and decisive victory from underdog Adrian Granados (11-2-2, 7 KOs) over Kermit Cintron (33-5-2, 28 KOs) and made it, instead, the first split draw of the evening.

Former world champ, Cintron, who is now 0-3-2 in his last five bouts, was flat and looked to be going through the motions from the very beginning of the contest. Despite having a massive edge in size, power, and experience, Cintron was consistently beaten to the punch by the hungrier Granados and dazed on more than a couple of occasions.

Cintron showed occasional moments of pedigree, but those moments were few and far between as Granados outworked him throughout the ten round contest in what should’ve been a career-best upset victory for the Chicago area club fighter.

Instead, only judge Patrick Morley saw Granados winning the fight he actually won by a score of 96-94. For the record, The Boxing Tribune scored the bout 98-92 for Granados.

In a four-round featherweight time filler, Hairon Socarras (7-0-1, 5 KOs) dropped Sergio Montes de Oca (7-2-1, 2 KOs) in the first round en route to a unanimous decision victory by three scores of 40-35.