Brian Viloria will be looking to make a big impact when he defends his WBO and WBA World Flyweight titles this Saturday in China. The Hawaiian bomber will be one of the main attractions on an ambitious bill at the Venetian Casino and Resort in Macao, China. Also on the card will be Chinese amateur star Zou Shiming, the double Olympic champion, who will be making his pro debut. 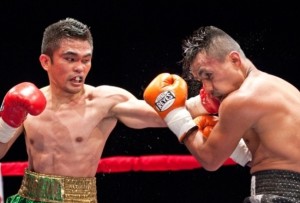 Viloria will be defending his titles against tough Mexican Juan Francisco Estrada. The young Mexican challenger fought on the same card as Viloria last November, when he made a spirited challenge for Roman ‘Chocolatito’ Gonzalez’s WBA Junior Flyweight Championship. While Viloria scored a spectacular 10th round TKO over Hernan ’Tyson’ Marquez in the main event, many thought that the fight of the night had been Estrada’s challenge of the unbeaten’Chocolatito’ Gonzalez.

Although Gonzalez retained his Junior Flyweight title with a clear decision, Estrada had gone toe-to-toe with the Nicaraguan Champion, in one of the fights of the year, displaying tremendous heart and durability along the way. Now Estrada challenges Viloria for the Hawaiian’s Flyweight titles and the ’Hawaiian Punch’ will try and do a better job on Estrada than Gonzalez managed to accomplish.

Viloria is eager to perform impressively in what is a showpiece event, with the card being broadcast live by HBO 2, amid hopes that it may lead to the tapping of a new audience for boxing in the highly populated country. The champion is already known for being a highly entertaining fighter with an aggressive boxing style and a big fight finishing punch.

At 32 years of age, Viloria looks to be at the peak of his career. The Hawaiian has enjoyed an impressive run of victories since moving up from Light-Flyweight to Flyweight, following an upset defeat to Carlos Tamara in early 2010, which cost him his IBF Light-Flyweight title.

Viloria rebounded from the setback by moving up a division and in 2011 picked up the WBO World Flyweight title from Julio Cesar Miranda. Following two successful defences of the WBO title, ’The Hawaiian Punch’ impressively stopped the rugged Hernan ’Tyson’ Marquez in 10 rounds, after another all action contest. The victory gave Viloria both the WBA title, plus general recognition as the best flyweight in the world at the moment. After twelve years as a professional, Viloria has become a better all-round fighter then he was in his youth, tempering his still exciting style with the experience, he has gathered over the course of his career, and it’s various ups and downs.

Viloria is now on the cusp of something much bigger if he can continue his recent run of entertaining triumphs. The fact that he is to get HBO coverage for this defence, is no small feat for the little Champion, considering his position within a division whose fighters often struggle for exposure and recognition. One possibility for Viloria if he wins against Estrada is a showdown with the unbeaten Roman Gonzalez, who is running up an imposing tally of defences as WBA Junior Flyweight Champion. ’Chocolatito’ may well be Nicaragua’s best fighter, pound-for-pound, since the great Alexis Arguello of the 70s and 80s. Due to the prejudices against fighters of the lower weights, he has received little recognition outside of the diehard boxing community, despite his obvious ability, which includes a punch that rivals Viloria’s for power. Certainly a clash between the two champions, would bring welcome attention to the lower weight divisions, where there is actually much entertainment to be had, if people only knew about them. The winner of such a fight would see themselves attain a considerably higher profile within the boxing landscape. However, the biggest winner of such a clash would be the boxing fan. The chances are that it wouldn’t fail to be a classic battle.

First, however, Viloria has to turn back the challenge of Estrada and that may not be an easy task. If Estrada at still only 23, has learnt from his previous fight with Roman Gonzalez and can improve on his performance against ’Chocolatito’ last year, then he could well prove to be a formidable challenger for the Hawaiian Champion. While Viloria must be considered the favourite, to retain his title due to his extra power and ring experience, it would be impressive if he were able to stop his Mexican challenger.

With Viloria’s track record, this doesn’t look like anything other than a very entertaining fight however long it lasts. Viloria will certainly be hoping that he can make another good impression in this defence of his titles, and open the way for bigger fights in the future.