Hello team and welcome to another episode of boxing’s Sunday Brunch! This week we will be taking a gander at China’s newest martial arts hero (No, not Chen Zen or Wong Fei Hung), Zou Shiming, who was in action this past Saturday. We will also be gazing in the crystal ball at next week’s super-clash when Nonito Donaire takes on the Cuban sensation, Guillermo Rigondeaux. Last but not least we discuss a potential Amir Khan mega-fight with Floyd Mayweather, also how the hell is he ranked at #2 by the WBC? With that being said, I gave you your instructions in the dressing room; What I say you must obey – Cuidate, escucha me, toca los manos y buena suerte…Let’s get it on! 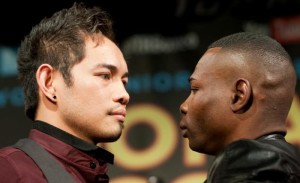 I’m glad that The People’s Republic of China, or more geographically specific, Guangzhou, has a boxer they can call their own now. Amateur star, Zou Shiming made his professional debut in front of a massive home viewing audience of over 300 million of his loyal countrymen. There were a few of us Stateside that caught the stream (before it was prematurely cut short) during the breakfast hours of Saturday morning, as well.

Not only was Shiming’s coming out party one of (if not THE) most watched boxing event of all time, but the two-time Olympic gold medal winner was paid more than any debuting boxer ever at a whopping 300,000 USD. His opponent, the Mexican Eleazar Valenzuela made (in comparison) a paltry 15,000 USD. Still way more than he’d likely make in Mexico fighting unknowns.

The 31 year-old is the most successful amateur boxer that China has ever had and he can easily draw comparisons to another ultra successful amateur standout, Guillermo Rigondeaux. Rigondeaux is also a two-time gold medalist in the Olympics and hasn’t lost a fight in over 10 years (the Cuban is undefeated as a professional).

Their pre-professional resumes are one of the few things the two have in common, though. Aside from decent head movement and lateral defense, Shiming is quite wild in the ring. He carries his hands low and looks to be susceptible to counter attacks – If they were launched from someone who wasn’t so thoroughly out-classed by his experience. I do believe that at his advanced age (31…Another trait in common with the Cuban, Rigondeaux) he will be fast-tracked towards a belt in the path of least resistance. Arum may be a lot of things, but a stupid businessman he is not.

This fight is one that I’ve been watching for quite some time and I am very interested to see what will happen when one of the best pure counter punchers in the sport today takes on one of the most dynamic fighters of this era.

I have said my piece about Donaire’s involvement with P.E.D. guru, Victor Conte in the past and I stand by my word that there is something beyond shady going on with he and Conte (although word is that the power pair split up recently), however, it seems though the clash is finally imminent and I’m predicting a coming-out performance from one of the two combatants (If you’re a betting man you have to like those odds, thank me later).

In other news, The Boxing Tribune’s Molotov cocktail slinging “El Presidente”, Paul Magno has reported that Bolton’s favorite son, Amir Khan has been bumped up the rankings over at the WBC to a cushy number two spot in the welterweight division.

Is it an odd move for someone who’s never fought at 147 pounds to be rocketed up the charts so blatantly and aggressively? The WBC has most certainly has made some questionable decisions in the past, but this one seems particularly egregious.

As the commander-in-chief of this website has pontificated, perhaps the move to vault Khan up the welterweight ladder is in anticipation of a mega-clash with the winner of the upcoming Mayweather/Guerrero fight this May. Floyd Mayweather has stated in the past that he would love to have a fight at the massive 90,000 seat Wembley Stadium in London, England. Mayweather gained popularity in the U.K. when he took the head off of fan favorite Ricky Hatton in December of 2007.

That’s all for this week team. We’ll be back with another Sunday Brunch show next weekend when we take a look at the Rigondeaux/Donaire outcome; We’ll also catch up on whatever else happens throughout the week in this crazy sport we all love. Remember to always brush your teeth, wash your face and for God’s sake, don’t forget to floss. Another Sunday Brunch is forthcoming, stay hungry, friends.