Rigondeaux added Donaire’s WBO title to his own WBA crown, and proved himself the supreme boxer at 122 pounds, in this long awaited clash, with a performance as picturesque as the Radio City Music Hall itself. 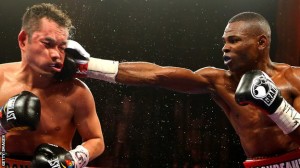 The fight started fast, with the ’Filipino Flash’ coming out aggressively and looking to set a high pace. However, Donaire was knocked back on his feet early by a sharp Rigondeaux counter that seemed to shake him slightly and make him more cautious. As the round moved on the pattern of the fight itself was set, with Donaire becoming hesitant at opening up too much because of the left-handed counters of ’The Jackal’.

It soon became apparent that Rigondeaux’s speed was going to cause Nonito lots of problems, as he seemed to be always a step ahead of the ‘Filipino Flash‘. Rigondeaux displayed some lovely footwork, and defensive moves, as the fight progressed, with Nonito stalking, but throwing mostly only single punches at a time, in order to reduce the amount of counters he was collecting in return. When Donaire did throw punches, the majority missed the always-elusive Cuban, and even those that landed, tended to be cleverly blocked or rode. Rigondeaux on the other hand, found Donaire cleanly and regularly with his southpaw jab, while pot-shotting with the left whenever Nonito left himself too open. The rounds were close but Rigondeaux edged many with his greater accuracy and defence, which allowed him to land the cleaner shots and remain the most elusive. Those who had predicted that Donaire’s greater professional experience would be the difference in this match saw Rigondeaux display a ring generalship and control, which belied his meagre eleven professional fights. By halfway Rigondeaux held clear control of the contest, as Nonito’s stalking became increasingly impotent.

Nonito’s best moment of the fight came in the 10th round, when sensing the fight slipping away, he came out of his corner at a run, and attempted to take control of proceedings, much as he had tried to do in the 1st round. The change in tactics worked for Nonito to begin with as Rigondeaux was bundled to the canvas by a push, which seemed to take him out of his stride momentarily. Donaire then scored a genuine knockdown after he struck Rigondeaux with a left-hook as the two were wrestling up close. The knockdown could be attributed partly to Rigondeaux losing balance when being caught square. Certainly after regaining his feet ‘the Jackal’ showed no ill effects from the knockdown, and countered the pressing Nonito with some good shots, so that by the end of the round he had regained control as Nonito again went into his shell and became hesitant to open up.

Rigondeaux sealed his victory with a dominant last round, which saw him hurt Nonito with a left to the eye, that had Donaire retreating and covering up in an attempt to shield the eye which swelled as the round progressed. The last minutes of the fight saw Rigondeaux at his most aggressive as he stalked the injured Nonito, and repeatedly fired his left hand in an attempt to score a stoppage. While the stoppage didn’t come for ’The Jackal’ there was little doubt at the end of who should be judged the winner. Although the fight was close, the edge, which Rigondeaux held in most rounds was clear, and in the end, his performance was a dominating one. Donaire found himself out thought as well as out-boxed in what was his first loss in twelve years and only the second defeat of his professional career.

Some of the crowd at the Radio City Music hall seemed frustrated by the fight developing into a tactical chess match, rather than a toe to toe barn burner like the recent Rios vs. Alvarado rematch, which is a shame as Rigondeaux displayed the kind of skills that sometimes justifies Boxing calling itself ’the sweet science’.

In victory Rigondeaux’s will find a justification for all the turmoil and sacrifices, he has made by defecting from Cuba and leaving his family behind. He has shown that his dreams of taking on and beating the best in the professional ring were not vain or misguided.

With this win, Rigondeaux lays genuine claim to a spot as one of the elite champions pound for pound in boxing today, and of being on a par with Floyd Mayweather for overall speed, technique and defensive ability. A rematch with Donaire would be interesting, but after the lesson he has just received, it is probable that the ’Filipino Flash’ may want to avoid any more confrontations with ’The Jackal’.

The undercard featured some explosive action previous to the main event.

At Welterweight Mikael Zewski 18-0 (14 KOs) koed Daniel Sostre 11-9-1 (4 KOs) in the second round, flooring him twice. Dropping Sostre first with a right to the head and then finishing him with a left hook to the head.

In a little 4 round war at light-middleweight, Tyler Canning 2-1 beat Dario Soccia 2-1 on a split decision.

Philadelphia Super-Middleweight Jesse Hart 7-0 ( KOs) scored a tko in the 3rd over Marlon Farr 2-3, flooring him first, then landing two big right-hands which ended it.

Felix Verdejo 5-0 (4 KOs) scored a destructive 1st round tko over Steve Gutierrez 4-4-1 (2 KOs) flooring him twice before the referee waved it off.

Lightweight Toka Kahn Clary 5-0 (4 KOs) scored a tko over Gadiel Andaluz 4-3-1 (2 KOs) in the 1st round after the referee stopped the action following Andaluz being dropped for the third time.