Hello family and welcome to another episode of boxing’s Sunday Brunch! This week is all about the excellent bout that took place live from my home town, New York City. Guillermo “El Chacal” Rigondeaux, the former two-time Olympic gold medalist and highly decorated amateur champion took the heart from one of boxing’s most beloved warriors in Nonito “The Filipino Flash” Donaire. So without further ado, warm up your toasters and grab some everything bagels, we’re about to start the show! I gave you your instructions in the dressing room, what I say you must obey – Cuidate, escucha me, toca los manos y buena suerte…Let’s get it on! 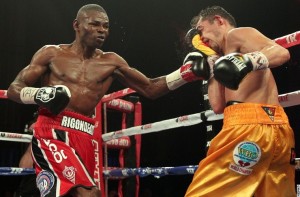 2013 has been an incredible year for fight fans thus far. Bradley Provodnikov, Rios Alvarado and now Rigondeaux and Donaire. All three fights were all out wars, the only difference was the high level of technical skill involved in last night’s match up. Boring for some, genius to others.

With surgical precision, Guillermo Rigondeaux dismantled a fighter that many placed atop of the mythical pound-for-pound rankings. All credit to Donaire for scoring a knockdown late in the fight, but that one straight left was his best accomplishment of the night against a man he long considered to not be on his level.

I’m being a bit critical of Donaire today, however, being placed so high in the minds of fans and generally being considered one of the best boxers in the sport puts you under the bright lights for both praise and scrutiny.

Some of the things that Donaire has been telling to the media before the fight stuck out to me as particularly obnoxious. Nonito Donaire is usually humble and honorable but when it came to the Cuban defector he seldom showed any respect.

Nonito comes across as a very demure character, but he gladly accepted the role of the ‘bad guy’ in the lead up to this match, especially at the weigh in. The Flash several times tried to intimidate El Chacal at the obligatory stare down, which is quite uncharacteristic for him. Not that it’s a bad thing, it is a fight after all, but I saw a big time lack of respect for Rigondeaux. Guillermo Rigondeaux, however, as always is all business – looking at his stoic gaze as the fighters stood toe-to-toe it was easy to see that he is a stone cold killer, very reminiscent of Miguel Cotto’s once icy disposition.

Donaire often claimed that a fight with Guillermo would be “great” but many times he and his team had excuses to not go through with it (Darchinyan rematch, anyone?). After all was said and done, though, he actually took the fight, something that most of us at home didn’t think was going to happen – that will reflect positively in his favor – even in defeat.

In pre-fight interviews Donaire had some interesting things to say about Guillermo Rigondeaux and the (super bantamweight) division: “If a guy is faster than me it could give me a lot of problems, but if not, it’s not going to be a fight.” He found out the hard way that Rigondeaux was both faster than he is and is a much better counter puncher.

Even more ironic, a few fights back Donaire told reporters “I believe straight up he’s a boring fighter [Rigondeaux], I know that I’m going to hurt him, and when I hurt a guy they tend to put their gloves up and run and that’s what ‘s going to happen if I fight him.” On who’s a legitimate threat at the weight: “A shorter southpaw like Rigondeaux – I can box him all day, I could beat him with the jab…Arce is the hardest fight at super bantamweight.”

Looking back it seems almost comical that Nonito Donaire went on the record several times saying that the Cuban didn’t pose much of a threat, that he wasn’t on his level…In my (not so) humble opinion, Nonito Donaire bought into his own press clippings way too much. He put so much stock in things like organizations giving him fighter of the year awards and perhaps he relied too much on his one home run punch that it actually became his downfall. Donaire spent last year fighting guys who had no chance to win, he was matched very carefully and it has to say something when half of those guys are now retired.

The thing with Rigondeaux that most people fail to notice is that he’s a master of controlling distance. He will sit in the pocket with you and make you miss wildly, much like Floyd Mayweather does. El Chacal’s speed is also deceptive; he appears slow but it is very much deliberate – when you least expect it, he sends out explosively fast punches and counters, all with horrible intentions and all from a seemingly slow handed guard. His feints made even “The Great Nonito Donaire” (as the great Roy Jones put it last night during the broadcast) look sloppy and off balance. This guy is truly an apex predator.

1. Nonito Donaire needs to get back to his roots. Stop relying on power so much, go back to using the jab to set up shots and don’t just look for the Hail Mary that made you a star in 2012.

2. Rigondeaux will likely not leave super bantamweight, he’s a career 22’er so I’d like for him to aim to capture all the belts in the division. That would be the IBF champion – Colombian, Jonathan “Momo” Romero and the title that was vacated by Abner Mares, the WBC strap. How well this plan would work out I am not so sure, though. Sometimes the sanctioning bodies have trouble sharing champions.

3. How about throwing some awards and accolades Rigondeaux’s way, BWAA? I know you were trying to create the next Manny Pacquiao and all, but come on.

4. I think the pound-for-pound list needs to be updated with Guillermo Rigondeaux closer to the top. The mythical P4P rankings were supposed to be a measure of all things being equal – skill for skill – how a fighter would fare in any division, along with level of opposition and accomplishments (usually). El Chacal is elite enough to compete (and more than likely defeat) with any fighter at any weight, skill for skill.

5. I think Nonito should get out of the Robert Garcia business and go back to training with his father.

6. Donaire should have taken the 3 million.

7. Priceless moment of the night? When Nonito saw his face on the big screen as the two boxers awaited the (peculiarly close) decision and grabbed the massive welt under his right eye in disbelief.

That’s going to do it for this week, I hope you had your fill of my randomly configured words. Remember, to cook the perfect hard boiled egg you must place cold eggs in cold water and bring it up to the boil, once boiling cover and remove from heat. Set your timer for exactly 15 minutes, once it beeps pour the water out and shake your pot at an angle to crack the shells (this makes removing them later much easier), fill with ice then cold water and let sit for a further 13 minutes, voilà – perfectly cooked. Sit tight team, another Sunday Brunch (and more great cooking advice) is forthcoming!