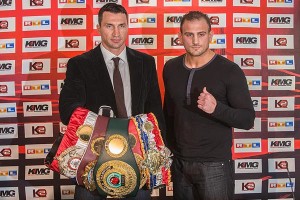 If this bout were not being held on the same day as a media-sucking Floyd Mayweather pay-per-view, it would garner the same tired old criticisms from the same tired old critics who feel that the heavyweight division has been a pile of dog shit since the mid-90’s. They would harp on this upcoming bout, bemoaning the appropriateness of such a match-up for such a large scale event. But this time, however, they’d be correct.

Klitschko-Pianeta is a cringe-worthy mismatch of epic proportions, the boxing equivalent of man vs. running helicopter blades or baby seal vs. 15-pound sledgehammer.

Pianeta’s moral victory in life is from having waged a successful bout against cancer. In the ring, though, the southpaw Italian’s greatest victories have come against fossils Frans Botha and Oliver McCall, carrying both to excruciatingly dull ten round unanimous decision defeat.

The 6’5″ Pianeta is as basic as basic gets, almost painfully so considering the fact that he’s an undefeated fighter with a no. 7 ranking in the WBA and on the verge of a ring appearance against one of boxing’s most dominant champions. The Italian’s own YouTube highlight reel features him winging wide punches, missing way too often, and taking shots flush on the face from Euro-club journeymen.

Klitschko, of course, is the consensus world champ and boxing’s best big man. He’s also someone who may be seeing his last soft touch for quite some time. Big, legitimate challengers are on the horizon and there’s simply no reason to ever revisit the Pianetas or Jean Marc Mormecks of the boxing world again. Names like Tyson Fury, Kubrat Pulev, and Robert Helenius are in Klitschko’s immediate future. As a matter of fact, Pulev and Helenius are Klitschko’s mandatory challengers, ranked no. 1 in the IBF and WBO, respectively. One of the two will be next and either will be far more competitive than what Klitschko will face this Saturday.

The heavyweight division is not as barren or as awful as many “experts” like to portray it. This match-up, though, is ugly. It stinks and it deserves to be panned. Blame the WBA for ranking Pianeta or blame Klitschko for choosing Pianeta as an opponent. Blame the 50,000 Klitschko-loving fans who will pack the arena to see this human sacrifice.

Klitshko-Pianeta shouldn’t be, but it is. The best we can do is patiently wait for Klitschko to coldly crush the guy and then hope for bigger and better match-ups to come.