“Don” Jose Sulaiman, WBC President for Life and 81-year-old lucre lothario, stood in his boxers, ironing his gray slacks in the bedroom of his Mexico City man cave apartment.

“Today is the day,” he sang in a raspy baritone. 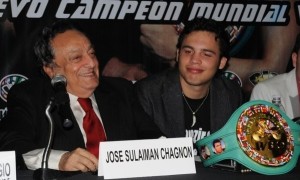 Yes, it was the day Sulaiman finally made his move, laying all his cards on the table. After ten years of tortured silence and repressed feelings, it was going to be do or die. Soar in the sky like an eagle or crash to the arid Mexican desert.

His heart was beating heavily in his chest as he found the perfect pinky ring to wear for such an auspicious evening. One final look in the mirror, one final deep breath, and he was off to meet Julio Cesar Chavez Jr.– godson, world champ, second generation star, and so, so much more.

“Don” Jose would have to wait nearly an hour for his special dinner guest. While loading up on salsa-heavy tortilla chips and peering anxiously at the restaurant’s front door, he rehearsed his planned dialogue in his head, over and over again.

Then, the door was flung open and Jr. came lumbering in, seemingly carried to the table by the rush of exhaust-heavy Mexico City air.

Jr. flashed a gummy smile before plopping down on a chair and shoving a handful of tortilla chips into his mouth.

“What did you want to see me about,” Jr. said while shards of corn chips shot from his mouth. He wiped the yellowish cornmeal sludge from his lips with the back of his hand.

“Come on, I don’t got all day.” Jr. picked his teeth with his pinky, then examined the chip remnants under his fingernail before sucking them back into his mouth.

Sweat beaded on Sulaiman’s forehead and his pulse raced.

“Junior, we have been friends for a long, long time. And you know how I feel about your father. I was wondering…” Sulaiman trailed off, looking to find the bravery to finish. He took a deep breath. “I want us to be more than friends…”

Jr. began licking the salt off a tortilla chip and then shoved it into his mouth with a loud crunch. He looked up at Sulaiman, but said nothing and quickly began looking around the restaurant. His ADD was getting the best of him and he became distracted by the clinking of plates in a nearby bus boy’s cart.

“Listen,” Sulaiman continued. “I know I am 81 and you are 27, but we are so right together. I am not a jealous man, I can share. I will share. And you know I’m generous. You know how generous I can be. I’ve even brought you a gift tonight.”

Jr.’s eyes focused back on Sulaiman. “A gift?”

The aged sanctioning body president reached under the table and produced a black leather briefcase. He placed it on the table and slid it over to Jr. “Open it,” he said.

Jr. undid the latches on the briefcase and opened it. Inside was a brand new WBC belt.

“It’s the WBC super middleweight title,” Sulaiman said, proudly. “We took it from Andre Ward, we’re giving it to you. I know how hard it is to make 160…”

“Super,” Jr. whispered to himself before letting loose with another gummy grin and raising his voice. “SUPER Chavez.”

The two, fighter and sanctioning body head, broke out in loud, simultaneous laughter that brought the table to the attention of everyone in the restaurant.

“But what if Ward comes back and wants the belt? Remember what happened with Martinez?”

“But that’s the best part,” Sulaiman assured. “Ward refused to take the emeritus title, he wants nothing to do with us anymore. It’s all yours, whenever you want it, and nobody can make you fight anyone you don’t like.”

A sneer came upon Jr.’s lips and soon morphed into yet another gummy grin. He shoved a few more tortilla chips into his mouth.

Sulaiman exploded from his seat with glee and tossed a pack of hundred peso bills on the table to cover the bill. He escorted Jr. to the door, opening it for him, and taking a long, lustful look at the fighter’s back side as he exited.

Thankfully, I decided to cut out the detailed love scene between the two dopes in this parody. This should not diminish, though, my attempts to showcase the apparent love affair between Sulaiman and Chavez as well as Sulaiman’s almost obsessive need to hand the world to Jr. on a silver platter.

It doesn’t take Sherlock Holmes to figure out why Andre Ward may have been stripped (or promoted to champion emeritus, if you buy WBC bullshit) a full four months ahead of the date where WBC bylaws dictate that he be stripped. Other champions have been equally as inactive under similar circumstances, yet have been allowed to keep their titles.

Vitali Klitschko, for example, fought on the exact same day as Ward (September 8) and has no firm plans for a bout any time soon. The big difference, though, may be that Julio Cesar Chavez Jr. is not flirting with the idea of fighting in Klitschko’s division.

The situation is reminiscent of when Jr. became a middleweight and the WBC shortly thereafter decided to strip Sergio Martinez of his title on a technicality. The belt would eventually be shuffled over to the second generation fighter while nobody at the WBC even bothered to look pretend-embarrassed by the maneuverings.

The difference, this time, is that Ward has removed himself from the picture, unlike Martinez, who hung around as diamond champ, made a nuisance of himself, and pushed for the WBC to live by their own bylaws in granting him a shot at Jr.’s title.

In a statement issued to media, Ward refused the silly “champion emeritus’ title and, basically, told the WBC to go screw themselves. In doing so, the path is now completely clear for a returning Chavez Jr. to take a spot at 168 and allow WBC rankings manipulations to keep him reigning for a very long time.

In the meantime, while Jr. returns from his Marijuana suspension and gets a couple of fights under his belt, a Sakio Bika-Marco Antonio Periban bout has been scheduled for the now-vacant super middleweight title. Neither fighter is an elite-level 168 pound fighter and both are vulnerable enough to play the patsy to a super middleweight-bound Chavez Jr.

Of course, this is all conjecture on my part, but it certainly fits the pattern of conduct displayed by the Chavez-loving Sulaiman and his merry band of enablers.

You can email Paul at paulmagno@theboxingtribune.com or watch as the blogger boycott against him helps him reach new career heights in readership. Paul is a full member of the Burger King Kids’ Club, a born iconoclast, and an ordained minister in the Universal Life Church.