Mexico’s Jose “Negro” Ramirez was on the long 48-hour plane flight home from the Philippines with nothing to do but relive the crazy and maddening last few days. After winning the biggest fight of his career, he was returning home without a belt and without a penny in his pocket—and nobody would tell him where it all went wrong. 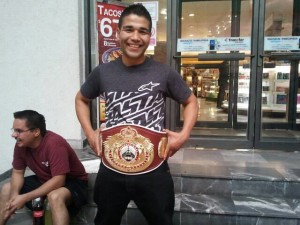 The 25-year-old Mexican fringe contender had made the trip over to the Philippines to challenge for Rey Bautista’s WBO International featherweight title on April 20. Expected to be resume-filler for the talented Pinoy fighter, Ramirez would flip the script and score a split decision victory over his more experienced, world-ranked, opponent. The upset, televised on ALA Promotions’ Pinoy Pride XIX card, would be a shocker for all involved and a point of pride for the young Mexican battler and his one-person entourage.

That’s when one of the greatest moments in Ramirez’s life would eventually become one of his lowest.

Ramirez celebrated the victory all evening at a nearby pub with the idea that he would return to the hotel, collect his career-high $8,000 purse, and take his title back home.

What Ramirez found out, though, was that he had already missed his flight by the time he got back to the hotel. He had been sent the wrong itinerary by the agent who booked the bout, Fernando Dominquez, and was now officially stranded in Davao City.

According to Mike Lopez, who covered the bout and the resulting chaos for the Mandirigmang-Pinoy website, the subject of the return flight was a source of confusion all throughout fight week. Dominquez had immediately skipped town with his agent’s fee and wasn’t answering the increasingly frantic phone calls and messages from Ramirez and his trainer.

Despite the chaos, Ramirez agreed to go ahead with the bout, confident that the confusion and the issue of two conflicting flight itineraries would be worked out.

The issue was never worked out.

The day after the fight, ALA Promotions informed Ramirez and his trainer that they would have to buy two new plane tickets and that the $6,800 cost would be coming from the fight purse. No receipts were shown, no explanations given. According to ALA Promotions vice president, Dennis Canete, the company had contacted Dominquez and the agent had given his consent to deduct the two new tickets from the fight earnings. Team Ramirez’s $8,000 purse was now $1,200, whether they liked it or not.

Ramirez refused anything less than full payment for his honest night’s work.

“We came here with a contract for $8,000 and two round trip tickets, Ramirez said. “We honored ourselves by fighting. We just want our fair share as we have honor and principles. Anything less will not be accepted… We had trained very hard for this fight and we have family to feed and clothe that is why we fight. The game of boxing is a dangerous sport and Bautista is world-ranked in the top 3 of the world in two organizations. I would not risk my life for $1,200”

To make matters worse, Ramirez was told that his newly-won WBO International featherweight belt was still being made in the factory and could not be given to him at the time.

So, with nowhere to go but home, Ramirez and his trainer Miguel Martinez, made the long trek back to Mexico with no money, no belt, and the burning feeling that they had just been hustled.

“When we get back to Mexico,” Ramirez vowed, “we will file a protest to the World Boxing Organization (WBO), the Mexico Consulate in Manila, the Mexico Boxing Commission and the California Athletic Commission against Dominquez and ALA Promotions for this debacle that happened. Fernando Dominquez is based in Los Angeles, California so we will get his license revoked.”

Eventually, though, feeling that the pursuit of justice was a lost cause, Ramirez would accept the $1,200 in Mexico via Western Union payment from ALA Promotions. Boxers rarely beat those that cheat them and, sadly, fans and media generally couldn’t care less about some unknown fighter losing food and bill money.

Recently, Ramirez would receive his belt, adding closure to the whole sordid affair. It’s a belt that represents, literally, the best of times and the worst of times for the young fighter.