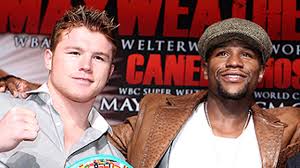 Underneath the layers of debatable talking points, biases, hatreds, and ginger jokes, lies what should be a fight that won’t knock you off of your feet, but it will have plenty of its exciting moments. And for those who stand on either side of the aisle typing out angry Twitter, Facebook, or message board posts, often in all caps, the truth doesn’t lie in yours or the angered response of another cyber warrior, but rather right here in this very column.

The big points being argued are the catchweight, whether or not Canelo is a worthy challenger, and the relevance of titles, both physical and mythical. These are the inconvenient truths.

Weight IS an issue

If you believe the catchweight is a minor detail and much ado about nothing, you may have also purchased worthless swamp land from one of those Erik Estrada infomercials a few years back. For people like me (and let’s face it, probably you as well, dear reader) losing two pounds is nothing. Hell, I can probably drop three or four pounds with a bottle of prune juice and an afternoon with nothing to do. We, non-professional boxers, walk around at comfortable weights. We aren’t 175-pounders shrinking down to an unnatural weight for the purpose of making a contracted fight weight, albeit one day before the fight. For a guy like Canelo Alvarez, who will balloon up to about 170 pounds on the day of the fight, it will be a factor. He struggles enough to make it to 154 pounds. Making 152 pounds may very well be a knife between the ribs prior to the national anthems.

After all, if the two pounds wasn’t an issue, we wouldn’t be having this discussion. And whether you’re an ardent Mayweather hater, or a TMT snapback-wearing fanboy, the argument boils down to strategy. Against Miguel Cotto, a much older and battle-worn adversary, Mayweather didn’t need any weight stipulations. As it pertains to someone much younger and fresher, however, just that little extra weight may take some of the chalk from Canelo’s cue stick in the later rounds, effectively stacking the deck in Mayweather’s favor.

As a big believer in consistency who has openly slammed Manny Pacquiao for fighting Cotto and Margarito at catchweights, I’m doing the same with Mayweather.

Following Mayweather’s May 4 decision win over Robert Guerrero, the “he’ll avoid Canelo like the plague” talk started. Canelo was the hunter, stalking the fight he wanted and earned, and Mayweather was certain to take on Devon Alexander or Amir Khan – both easy outs – in his next fight. Now that the fight is signed, expect the narrative to shift courses, with Canelo going from the vicious, young, and fearsome killer to a stumbling, bumbling caricature of Ron Howard in Happy Days. You’ll see the narrative ramp up in the days before the fight, and dominate the news once Mayweather wins.

It is true, that Alvarez is rather flat-footed, and has stamina issues, but he does have youth and impressive punching power on his side. In addition, he’s shown visible improvements when he isn’t resting in the middle of a round. Can we possibly see an upset? Absolutely. Is it likely? No.

Mayweather is head and shoulders above the rest of the field right now. He’s slowing down but still moving faster than anyone behind him. It isn’t his fault everyone he faces can’t beat him.

The TBRB is as full of shit as The Ring

Yes, it is true, true believers. Our savior, the Transnational Boxing Rankings Board (TBRB), is just as full of shit as The Ring. You may remember the TBRB burst onto the scene in late 2012 promising change and reform. They had had enough of Ring Magazine and their opinion-based rankings making a mockery of the sport, so they set out and created their own opinion-based ranking system and gave themselves an acronym filled with all sorts of possibilities for sophomoric humor (Go ahead, give it a try. It’s fun).

Mayweather-Alvarez will be fought for one of the TBRB’s twelve vacant titles. The number one (Alvarez) is fighting number two (Mayweather) for all the marbles. If you can ignore the fact that Mayweather’s ranking in the division defies logic (more on that later), Mayweather should have been removed from the rankings on May 6, 2013 according to their second “rule of thumb”.

In those instances where a contender is inactive for one year or more, he will be removed from the rankings until such time as he fights and earns back a place in the top ten. Exceptions for medical issues will be considered.

But, as we’ve seen with the other rankings systems, there’s always a loophole available for the right fighter(s).

In those instances where a fighter announces his intention of competing in a new division, he will be removed from his former division’s rankings only after he competes in the new division and his intention remains.

Meaning they’ll wait up to 18 months, depending on who it is (see “rule of thumb” #4.2). To further illustrate the ridiculousness of this rule, compare the TBRB to the WBA, who in April leaked word that the April 20 title unification bout between then-titlist Austin Trout and Alvarez would be for the WBA“super” junior middleweight title, which had been held by Mayweather up until that point. After some debate, that decision was thrown out and Trout wasn’t promoted to “super” champion, but instead remained “regular” champion.

The WBA wanted to wait and see what Mayweather would do after he beat Guerrero, before deciding to strip him of his title. Sound familiar?

You can argue the validity of the rankings all you want, it all goes back to the starting point of this argument; Floyd Mayweather’s TBRB junior middleweight ranking is a sham. I’ll tell you why.

No fighter earns a place in the top ten by appointment. Name recognition or previous record in a different weight class is not necessarily an indication of performance in a new weight class.

So, with only one fight at 154 pounds since 2007, Floyd Mayweather vaulted himself all the way into the top spot in the division with his victory over Miguel Cotto (TBRB October 2013 rankings), who was arguably the division’s best at the time. Wait, that makes sense, right? No. One can argue that Mayweather’s win over Cotto could have gotten him a spot somewhere in the lower top 10, but is number 1 earned, or appointed based on name, popularity, and marketability? Had Cotto lost to Michael Medina, would Medina have been ranked #1? Opinions will differ, and rankings will vary. Doesn’t this remind you a lot of Ring Magazine?

You can send fanmail, hatemail, and TMT swag to Tim at timharrison65@gmail.com, or follow him on Twitter and watch his glacial climb up to 1,100 Twitter followers at  www.twitter.com/TheTimHarrison.