It was a very light week for women’s fight action. The lone title bout of the week took place in Guerrero, Mexico where Victoria Argueta (11-1, 4 KO’s) met Suri Tapia (7-3, 2 KO’s) in defense of her WBC silver minimum weight title. Argueta, who also holds the Mexico minimum weight title, worked her way to unanimous decision win by scores of 97-94, 97-93, and 96-94. 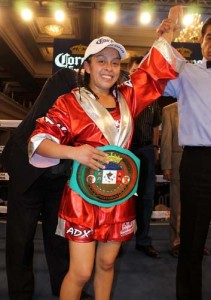 The lone defeat on Argueta’s ledger was a world title attempt against WBC minimum weight titlist Nacko Fujioka in October of 2012, in which she lost a 10 round decision. Prior to the failed title bout, she was undefeated in her first nine outings, scoring five wins in 2011 alone. This weekend’s bout was her second straight win and first defense of the silver belt she won in March.

Suri Tapia lost her pro debut in 2011, but made good headway since, picking up seven wins and was a busy fighter in 2012, fighting and winning six times. 2013 hasn’t been as kind to the Acapulco native; she dropped a 10 round decision to Arely Mucino in March, followed by the Argueta loss, which was her first title attempt.

In amateur news, Virgina Fuchs of Kemah, Texas scored big at the Olympic Cup in Puerto Rico. Fuchs took home a gold medal in the 112 pound division with a first round stoppage of Janet Gowtiz. It wasn’t her only stoppage of the tournament; all of Fuchs victories in the tournament came by TKO.

WBC world and silver flyweight champion Ava Knight tried her hand in a different athletic competition early this month. The “Lady of Boxing” competed in the Chico Bodybuilding, Figure and Bikini Competition, in Chico, CA. Though she failed to place this time, her goals are set on adding a first place figure competition trophy to her world title belts.

In addition to Knights current WBC belts, she has also held the IBF flyweight title, WBO bantamweight title, and the WBC super-flyweight title. Her record stands at 12-1-3, (5 KO’s), undefeated in her last eight contests.