Barclays Center, Brooklyn, New York– Adrien Broner (27-0, 22 KOs) did what he was supposed to do Saturday night against Paulie Malitgnaggi (32-5, 7 KOs), but didn’t go out of his way to impress in his first gig on Showtime. At the end of the evening, “The Problem” came away with an odd split decision win and a WBA welterweight belt that is so paper-thin at the moment, that it could probably be slipped under his hotel door. 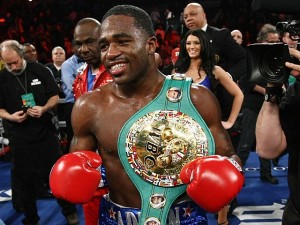 For four rounds, Malignaggi did his best to look like a determined underdog by slapping the hell out of Broner’s forearms and shoulders. However, when the real fighting broke out, it was all Broner, who pot-shotted Paulie at will and landed the only meaningful punches in the bout.

Strangely, though, Broner didn’t show too much of a will to do more damage and cruised for large portions of the fight, content on shaking his head derisively at the power of anything Malignaggi threw and counting on the competence of the judges to only score punches that actually landed in scoring areas.

Through Paulie’s tongue flicking and Broner’s head shaking, fans were also treated to Broner’s backward-spinning-thingy punch, a straight-up crotch kick from Broner, an over-the-top-of-the-head double punch, also from Broner, and some horrendous dance moves from Malignaggi whenever he wanted to prove that he wasn’t hurt from a head-rattling shot. The bout could’ve easily degenerated into a nasty foul fest, had either fighter cared enough to be more aggressive.

After the bout Broner acted like a jackass and Paulie whined about getting robbed– oh yeah, and they argued again about Malignaggi’s alleged “side piece.”

This one was too disgustingly dreary and vomit-inducing to even recap…Here’s the brief synopsis:

Banks suffers questionable knockdown in the second, nearly knocks Mitchell out in third…Inexplicably, he lets Mitchell off the hook in the fourth…Spends the rest of the fight attempting NOT to punch Mitchell until the time runs out and Mitchell wins a unanimous decision. Hooray for boxing!