First off I would like to thank God and Al Haymon for this Sunday Brunch, with them all things are possible. Well, for sure with Al Haymon, anyway. Hello team and welcome to another edition of the weekly column that is the Red no.5 in your sweet and sour sauce…We are the extra salad dressing you asked for but never received – Boxing’s Sunday Brunch. This week we’re going to take a peek at the Paulie Malignaggi vs Adrien Broner showdown from Saturday night and possibly what’s next for these two fighters, also we’ll be learning a New York delicatessen classic today. – With that being said, I gave you your instructions in the dressing room, what I say you must obey. Cuidate, escucha me, toca los manos y buena suerte…Let’s get it on! 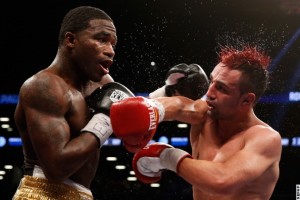 Many have asked me already if Adrien Broner is going to be the next Floyd Mayweather. He’s athletically special, a very hard puncher and he loves to fight. However, even though he’s young and has room to grow, his mentality might stifle any growth potential he may have.  Adrien Broner possesses a high level of athleticism which will serve him well from 135 to 147 or until the day when he’s matched with someone who’s equally as dynamic as he is.

As far as his performance on Saturday night, well I will just say that Broner looked like a man who didn’t have all the answers that were being asked of him. No shame in that at 23 years of age but I continue to say that some humility would help Adrien’s plight immensely.

One thing is for certain, though. Broner’s people have studied a lot of footage of Mayweather’s people talking-up and praising their fighter. Adrien Broner himself has studied a lot of tape of Floyd’s mannerisms, speech patterns and boxing tricks. This reminds me of that old adage, ‘to be the man you have to pretend to be the man’…Something like that.

You know what you’re going to get with Adrien Broner, so take it for what it’s worth. Maybe later on in his career he can snap out of this immature mindset to an extent and blame all the accumulated vile dialogue and actions on theatrics like certain other champions have done.

After Broner’s accuracy and timing wrested Paulie’s welterweight title from him I assumed a bit of professionalism would be an easy bet from both men.  Malignaggi attempted to take the classy route after the bout, congratulating and otherwise showing good sportsmanship to AB, but the moment the three-time champion had a chance to speak it was back to the elementary school name calling and other vociferous blather from the Cincinnati native.

Paulie Malignaggi fought a smart veteran fight. He played to all his strengths and somewhat minimized his flaws, although he was a couple of clean, educated punches away from being knocked senseless a few times during the fight.

The Magic Man threw a lot of shots, though many didn’t land on target – I suppose Paulie was relying on his activity regardless of accuracy to win this title defense. He commented after the match that he should have at least got a draw so he could have kept his belt, a nod to the old standard thought that ‘you need to thoroughly beat a champion in his home town to win’ that he spoke about after the match.

I like Paulie, I think he’s funny and he is a very good commentator but I do think Adrien Broner did enough to take the title from him. The vast majority of Malignaggi’s offense (mainly his flashy combinations to the body of AB) was blocked by the lengthy forearms of the 23 year-old. Paulie may have out-threw Broner, but as far as overall effective aggression I think that it was clear the right person won.

2. The 360 spinning uppercut that Broner attempted to land after a break midway through the fight was very Mike Tyson’s Punch Out ‘Start button super uppercut’ of him.

3. Malignaggi sticks his tongue out when he’s in situations of high pressure or getting punched; a sure fire sign that he’s in trouble, at least to some extent.

4.The dejected look on Zab Judah’s face when Brian Kenny referred to him as ‘someone who won early rounds against Floyd Mayweather’ was priceless.

5. I could tell by the sound of the booing crowd that they shared my fondness for the “brush my hair” routine.

6. Speaking of that, I am not sure if Broner is the heir apparent to Floyd Mayweather.

7. This morning I shook my magical 8-ball of boxing answers and it said that the outlook was not so good.

8. At the ritual post-fight interview with Showtime’s  Jim Gray Adrien Broner proclaimed that his fans will choose his next opponent. Whether or not that will be from a very small list of handpicked opponents remains to be seen.

Begin in a nice large stainless steel bowl, open six cans of the tuna fish (this ratio can be scaled up or down quite nicely) and pour all contents including the olive oil in to the bowl. Grab a wooden spoon or a large dinner spoon and start to combine the fish with 1C. mayo (not miracle whip!), one big tablespoon of Dijon and 2tbs diced dill pickle relish along with 2tsp of dill. Mix well and taste, adjust seasoning if necessary and add xanthan gum last if using. This will ensure the oil in your salad won’t separate from the tuna but it’s obviously not going to affect the flavor if you opt to omit it.

Grab your cold sub bread and slice down the middle if need be, give a nice layer of mayo on one side and place a small handful of sliced green olives on top of it. Slather the tuna mixture on top of that and place a good amount of shredded lettuce on the dry side of the sandwich. From there the only thing that is left is adding your last minute oil and vinegar with a touch of salt and pepper to round out the flavors.  I hope you enjoy this recipe, it’s a classic in my house!  We’ll be back next week with more boxing jibber jabber and flim flamming along with more great food tips, tricks and guidebooks. Ciao family, we’ll see you next Sunday for another edition of boxing’s Sunday Brunch.