Don’t be fooled by the fight reports, EVERYBODY was a winner at the Barclays Center in Brooklyn Saturday night.

Adrien Broner, obviously, got to keep his unbeaten record and was able to pick up his third world title in as many divisions at the tender age of 23. “Baby Bro,” whether one likes it or not, is going to be a star unless he self-destructs somewhere on the road to the top. 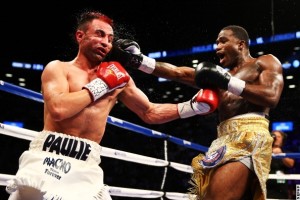 Paulie Malignaggi walked away a winner as well by just playing his usual game.

There was never any real doubt that Malignaggi would lose– and he did— decisively. All Malignaggi had to do was look reasonably sharp and find some way to generate controversy. He succeeded in both objectives. The “Magic Man” not only turned in one of his sharpest ring appearances, but he cried a river after the bout, reliving the “magic” that won him a second career wind after his legitimate robbery loss to Juan Diaz back in 2009:

“Tom Schreck is a New York judge that was in Al Haymon’s pocket, it’s very simple. I mean, 117-111 was a joke, man…Boxing is always full of shit,man, it’s always politics..The fans can never go home happy…You get a great show and always gets spoiled with some BS like this…It’s definitely part of th3e game, but somebody should stand up and do something about it…I feel like I’m the only one who talks and opens his mouth…I got a good job. I work with you guys at Showtime, I’ve made some really good money in boxing, I made some really good money tonight, I don’t have to fight again..If I never fight, I’m still OK…I enjoy competing, I enjoy fighting , but when it’s like this,man, you know, it’s BS.”

A truly touching monologue had he also chosen to stand on the soapbox back when he got the nod over Pablo Cesar Cano last October or when he became the mandatory WBA welterweight contender for doing little more than signing up with Golden Boy Promotions. Sorry, you don’t get to rage against the machine if you’ve used the machine to your benefit.

In any case, Paulie has now bought himself at least two more fights– an Orlando Lora-type midcard gimme and one more Showtime main event against the next guy Golden Boy wants to push up the ladder.

Malignaggi’s presence on the boxing main stage is truly a remarkable achievement. Never has someone received so much for winning so few main stage bouts. Malignaggi is the Kim Kardashian of boxing, all sizzle and no substance. Paulie’s best work comes before and after the bells, yet here he is in main event after main event even after we know what to expect (and not expect) from him. Chalk this up to his gift for gab and his willingness to teabag the media with salacious headlines and ACCESS. In any other universe, Malignaggi would be little more than a high-grade sparring partner. His hustle is admirable.

But getting back to the evening of winners in Brooklyn…

Broner definitely didn’t look like a world beater. And there was enough of a sliver of controversy involved to keep the head nerd at your favorite boxing blog shin-deep in snarky commentary for weeks.

As for the fight, itself? It was alright. It totally looked like Gatti-Ward after that disgusting Seth Mitchell–Johnathon Banks double career-killer on the Showtime telecast. Malignaggi appeared to be supremely motivated, but is simply not an elite-level fighter. Broner may be an elite-level fighter at some point, but he’s not there yet.

It was obvious that Broner could’ve torn Malignaggi to shreds had he cared to do so. Instead, he carried Paulie for no good reason. A better opponent would’ve exploited that laziness and Broner’s dad may have had to brush Adrien’s hair in an ambulance on the way to the hospital.

“I’m Good…I beat Paulie, I left with his belt and his girl.”

Yeah, Adrien’s good. He left with the paper-thin WBA belt and gets to keep Paulie’s well-traveled “side piece.” This was a gimme fight that should’ve been more of a gimme. Either Broner steps up and truly becomes the next Mayweather or boxing has little more than a more entertaining version of Devon Alexander. The next couple of fights should tell the tale.

You can email Paul at paulmagno@theboxingtribune.com or watch as he spits game to all of your side pieces. Paul is a full member of the Burger King Kids’ Club, a born iconoclast, and an ordained minister in the Universal Life Church.