Saturday, June 29th at the Bolton Arena in Bolton, Lancashire, United Kingdom, Gavin “The Rock” Rees (37-2-1, 18 KO’s) will look to get back on the winning track when me meets Anthony “Million Dollar” Crolla (25-4-1, 9 KO’s) for the vacant WBO Inter-Continental lightweight title. 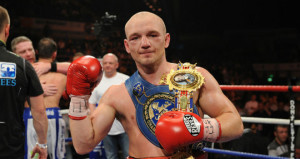 Rees is coming off a gutsy, but losing effort against Adrien Broner, a bout that was telecast on HBO for Broner’s WBC lightweight title. Broner’s skills were just too much for the Wales native to handle, but Rees did much better than many expected and he earned some much deserved respect for his efforts.

Prior to the Broner outing, Rees held the BBBofC and EBU lightweight titles and was unbeaten in 11 bouts: 10 wins and a four round technical draw with Derry Mathews where Rees was ahead on all three scorecards when the bout was stopped. The Rock also held the WBA lightweight title briefly in 2007, but lost the belt to Andriy Kotlenik in his first defense. He went on to win the 2009 Prizefighter tournament following that bout.

Anthony Crolla is the current BBBofC English lightweight title holder, and is 1-0-1 since losing to Gary Sykes in the U.K.’s Prizefighter tournament in 2012. His last outing was a 12 round draw with Derry Mathews, a rematch of their 2012 bout which Crolla lost via sixth round TKO. From late 2009 through 2011, Crolla had run up an impressive streak of 10 wins, four by stoppage, and held the BBBofC English super featherweight and BBBofC British lightweight titles.

Rees has an aggressive style, and likes to work his way inside his opponents reach to get his work done. It’s a style that’s served him well, being that he’s usually at a height disadvantage on fight night. He’s fought better opposition than Crolla, and has experience at the world class level. At 33 years of age, the big question is how he can rebound after that tough outing against Broner.

Crolla holds a seven year age advantage over Rees, and though he hasn’t seen the level of opposition that Rees has, he’s fought some very good fighters on the way up. This is the perfect opportunity for him to breakthrough and be a legitimate world class contender. He’d be best served using his height and reach advantages, and not allow Rees to pull him into a toe to toe slug-fest.

It’s a big opportunity for both fighters, a bout that could determine who falls in line for a shot at the WBO world title holder Ricky Burns. The feeling here is that Crolla will do well early on, but Rees will catch up with him in the middle rounds and work his way to a unanimous decision win.