From what I’ve been told, readers go ape shit over Top 10 lists. So, let’s give the people what they want, Rant-Style:

OK, now what if Ward lopped off a leg and Mayweather agreed to grow out his afro and beard until he looked like black Santa Claus? That would probably be the only way these two fighters 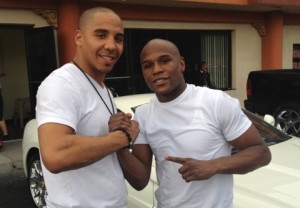 could ever meet in a reasonable catchweight bout. But the utter impossibility of this welterweight-super middleweight clash seems to escape the brain fart filter of way too many “reasonable” writer-types. While true stupidity can’t ever be ruled out, this fantasy match-up appears to come from the “let’s never give Mayweather credit for anything” camp. And, really, it’s the perfect no-win situation because a smallish welterweight can never fight a super middleweight one snack cake away from light heavyweight. So, gee, I guess Mayweather will always be “ducking” Ward.

The USADA Sucks and is Biased!

The USADA is the standard for PEDs testing in the American sports scene. Realistically, does anyone without an anti-USADA agenda think that this major multi-million dollar agency would risk bringing itself down over Danny Garcia-Erik Morales? Boxing’s commitment to PEDs testing sucks and the USADA is only really guilty of poor decision-making skills in agreeing to take these side gigs with a sport so obviously not serious about exploring a serious drug testing policy.

Al Haymon is the Antichrist

Make no mistake about it, of all the people in boxing, Haymon is probably the only one actually doing his job well. He’s a manager. He’s supposed to get the best deal for his fighters. If he makes bitches out of promoters and network people, that’s just a testament to how well he does his job. Instead of blaming the player, we should insist on everyone else developing some game.

The Heavyweight Division is Dead

Tell that to an entire half of the planet where the Klitschko Brothers are the Mayweather and Pacquiao of boxing. Yes, despite the cold shoulder to USA fans (who have already made it clear that they want nothing to do with the Klits), Wladimir and Vitali are immensely popular fighters. And beyond the Klitschkos, the heavyweight division is actually quite deep and intriguing at this point, with almost complete parity from #3 through #15 or so. It’s certainly not the rest of the world’s fault that the U.S. can’t produce a high-end heavyweight these days. So, until we can stop hyping the hell out of fat slobs or glass-jawed ex-football stars and get serious about building a star, let’s just enjoy a solid, solid division in a bunch of afternoon fights from Europe.

(So and So American fighter) is not a Draw

In the American fight scene there’s Mayweather, Pacquiao, and the ethnic niche fighters (Cotto, Chavez Jr., Alvarez). Every other main stage fighter is pretty much at the same level of stardom. It’s awesome for biased boxing writers to point out that so and so is not a draw, but it’s not quite so awesome when you realize that pretty much anything you put on HBO and Showtime draws about the same rating. Whether it’s the “boring” Andre Ward or Timothy Bradley (who miraculously stopped being boring for some when he signed with Top Rank), nobody really goes far beyond the million mark on premium cable. Ward, Bradley, Hopkins, Dawson, Alexander, etc. and even media darlings like Brandon Rios and Nonito Donaire…They have all been pretty much in the same boat for a very long time when it comes to drawing power.

All is Well, Corruption is Overstated

Every once in awhile, you’ll come across someone who will insist with a straight face that corruption in boxing is vastly overstated. Other than the brain injured, two types of people believe this– The pie-eyed hobbyists just happy to have a laminated press pass and the old-timers whose ability to think clearly has been compromised by a career’s worth of free swag and hobnobbing with the same creeps causing the problems. Boxing’s entire system is built for the con job and the quick hustle. It’s commissions are appointed by the same politicians playing golf with the promoters in private country clubs and its officials are paid by the commission, which gets its money from the promoter (the same promoter paling around with the politicians who appoint the cushy commission jobs). Sure, a good part of what’s wrong with boxing is due to incompetence, but that incompetence is there for a reason– and the reason is that boxing’s entire structural model is fucked up. And it’s fucked up because at the top of the heap is a heaping mound of manure.

“By my Calculation,” AKA: Fantasy League Syndrome

Sometimes we forget that most of today’s boxing experts became genius analysts by watching their TV really, really intently and have virtually no first-hand experience with combat. Never is this clearer than when the head nerd at your favorite blog or an unpaid expert commentator at some “major” site attempts to explain a fighter’s legacy and/or place in history. Using an abacus and secret decoder ring, every one of these geniuses has their own system– even when their dopey system provides dopey results. So, deal with it. Maybe Joe Frazier doesn’t belong in the Hall of Fame and Tommy Hearns was an overrated bum. After all, these writers are the experts.

“I am not JUST a boxing writer,” AKA: The Shakespeare/ Hipster Doofus Syndrome

Imagine the horror of writing to the common man rather than for a small batch of acne-scarred, fanny pack-wearing fellow bloggers. These well-read dweebs feel the burning need to gussy up their prose to the point of impenetrable density in order to prove that yes, they are special. What do Sylvia Plath and Voltaire have to do with Chad Dawson and Juan Manuel Marquez? Nothing, really. But this particular type of writer feels the need to hide the fact that trivia is really all he knows about boxing. Just as the mainstream shills feel special with free swag, these pretentious geeks can only feel complete if we all understand that, yes, they read stuff other than those jizz-stained Ring Magazines in their basement.

“So and So” is Afraid

The easiest hit job you can do from the media side of the computer screen is to point out the guys a particular fighter hasn’t faced. Every fighter has a list of bouts that could’ve and maybe should’ve been made, but never got around to happening. Most often, especially in this day and age, the politics of the boxing business are responsible for keeping certain logical match-ups from happening. Even when a fighter make the conscious decision to avoid a certain fighter, it’s not because he’s cowering in fear over the prospect of being punched in the nose. World class fighters don’t become world class fighters by having a yellow streak. Show me a fighter who doesn’t care a lick about the risk-reward factor in his matchmaking, and you’d most likely be showing me a journeyman. All fighters, especially those at the highest levels of the sport, make calculated decisions as to which match-up is most beneficial to them.

“I love everything and everybody”

Give some people a laminated press pass and access to a few well-known fighters and they will be forever grateful. Every card is “stacked” and every fighter interviewed is the greatest thing since Shakira’s gyrating hips. There’s no need to shower these ready-made dupes with free stuff and extra favors, they will shill of their own volition and sell whatever needs to be sold.

You can email Paul at paulmagno@theboxingtribune.com or watch as he makes fake mean bloggers wet their skid-marked Jack Dempsey chonis on a daily basis. Paul is a full member of the Burger King Kids’ Club, a born iconoclast, and an ordained minister in the Universal Life Church.