Recently, The Boxing Tribune’s Hans Olson was able to steal a few moments with undisputed middleweight king, Sergio Martinez to ask about “Maravilla’s” injuries, philosophies, and goals for the future.

– Hey Sergio, thanks for taking the time to answer these questions for The Boxing Tribune. How are you feeling since your fight with Martin Murray? 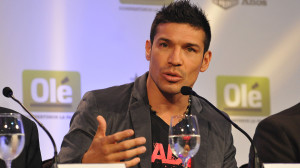 Hi Hans, how are you? I feel good, it’s been more than two months and I’m recovering from my injuries.

– How could you describe the feeling of fighting back in your home country?

It was amazing! I thought it would never happen. I have been many years in the top of boxing, but in Argentina I was almost a stranger. I’m glad to finally hear my name and the fact that people recognize me.

– Many had you winning a close fight (I scored it 115-112 for you, as the judges did). Some thought Murray did enough for a draw, or a win. What was the difference in your eyes?

It was a close fight, no doubt about it. I think that I won by one or two points. The referee must have counted me on the second knockdown.

– What is the status of your injuries, and when do you plan on fighting again?

I definitely will not fight again until next year. Possibly in March or April. I have 38 years, my injuries do not heal as before.

– Before your career is over, will you again fight in Argentina? How about Spain?

It’s very hard. I’m trying to lift boxing in Spain with my promotional company, but it is a job that takes a lot of time. Right now we would not find enough support to do something there like we did in Argentina.

– A lot of people ask about the rematch with Chavez, a fight with Golovkin, or a fight with either Peter Quillan or Daniel Geale. Who do you want to fight next when you return?

We want another fight before facing Golovkin or any of the other champions. I want it to be a unification fight, but I need to check myself after injuries to be 100%.

– Argentina has some great young talent now with Matthysse, Maidana, and Abregu. What are your thoughts on them?

Argentina is a land of champions. I have not doubt that between us we will sign the Argentine boxing final resurgence.

– What are your thoughts on PEDs and drug testing in boxing?

The fight against doping must be a priority in boxing. All other sports are taking it out, we can not stay behind.

– If you could change one thing about the sport of boxing, what would it be?

– Finally, What is there left for you to prove in boxing?  What will it take to achieve those goals?

Like as I said in many times, I want to be remembered first as a good person and a man of integrity. After that, if people remember me as a good fighter, that would be nice!