AT&T Center – San Antonio, Texas – “Knockout Kings II” delivered plenty of blood and guts action and a couple knockouts. Andre Berto (28-3, 22 KOs), looking to turn things around after losing two of his last three, was upset by underdog Jesus Soto Karass (28-8-3, 18 KOs), the hard-nosed journeyman. The co-feature delivered a potential Fight of the Year between Omar Figueroa (22-0-1, 17 KOs) and Nihito Arakawa (24-3-1, 16 KOs), a fight that failed to deliver a knockout but gave fans twelve rounds of non-stop action. And in the opening bout of the night Keith Thurman (21-0, 19 KOs) stopped previously unbeaten Diego Chaves (22-1, 18 KOs) in ten rounds. 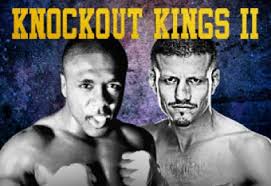 Jesus Soto Karass took the first round almost entirely on his aggression alone, if not for a right hand that hurt Berto and punctuated the round. Berto settled down and took the second with several hard counter right uppercuts before falling back into his bad habit of squaring up and making himself a large, hittable target in round three. Soto Karass had Berto hurt with several uppercuts of his own before the round ended.

The fourth and fifth rounds were more good work Soto Karass. He had Berto dazed and back against the ropes for nearly the entire last minute of the fourth, and on his heels and ineffective for most of the fifth. Berto appeared to injure his shoulder when he missed with a wide hook and went down hard. Berto fought the rest of the night using his right hand sparingly, and much to his detriment. As Soto Karass strafed Berto with wide, looping shots, Berto was unable to effectively counter and looked like he was ready to fall. Berto came back in the sixth and seventh rounds with more zip on his punches as he went back to throwing the uppercut when Soto Karass would lean in.

Berto dropped Soto Karass with a beltline left hook in the eleventh to stem the tide and steal some momentum, but it was short-lived. Early in the twelfth and final round, Berto and Soto Karass both threw their left hooks. Berto’s was wide while Soto Karass’ hook was short and landed right on Berto’s temple, dropping him to the canvas. Berto would make it to his feet by the count of five, but he was on unsteady legs and was unable to continue. The time of the stoppage was 48 seconds of the twelfth round.

Jesus Soto Karass moves on and possibly buys himself another shot at a title run, while Andre Berto is faced with questions about his future in the sport.

The co-feature was the fight of the night and potentially the year. Omar Figueroa and Nihito Arakawa came out throwing bombs in the first round. Figueroa switched to southpaw and against the southpaw, and was effective in dominating the pace of the round. The furious pace continued into the second round, when a right hand from Figueroa staggered Arakawa, and after another volley of power shots referee Laurence Cole issued a standing eight count. By the time the third round came around it looked as if Arakawa, who stood his ground and threw punches in bunches, had weathered the storm. He pushed Figueroa to the ropes and never stopped throwing, but Figueroa came roaring back to end the round.

Both men fought as if every round was the last, until the end of the last round. Standing forehead to forehead they pounded away at each other, taking momentum for moments at a time before having it ripped away. Another big right hand from Figueroa rocked Arakawa, he staggered forward and tried to tie up Figueroa, who side-stepped and flailed away at Arakawa as he leaned out through the ropes.

Little can be said about this fight aside from the entertainment value of it. Each round looked like the last until the very end. Nihito Arakawa threw 1,170 punches in the fight to 942 from Figueroa. Omar Figueroa was declared the winner, with the three judges turning in two scores of 118-108 and 119-107. The Boxing Tribune scored the fight 117-108 in favor of Figueroa.

In the opening bout, Keith Thurman and Omar Chaves fought cautiously in the first few rounds before turning in a rather exciting fight. Thurman danced around looking for an opening for his left hook, while Chaves looked to counter with his right hand over that left hook. Both could have benefited from a bit more body work early on, but each landed the occasional power shot downstairs. As the third round progressed and Chaves began to open up and throw his left hook more, it opened the door for Thurman’s right hand counter. Thurman began to use his jab to disrupt Chaves and land more power shots as he circled the outer region of the ring. The fourth round was an important round for Thurman, who put some distance between himself and Chaves, as mid-fight adjustments allowed him to control the round.

It was Thurman’s movement that gave Chaves problems throughout. Chaves was always just out of optimal range and was left lunging wildly with his power shots and was being countered by the rangier Thurman. A partially blocked left hook downstairs forced Chaves to take a knee in the ninth round, opening up the scores a bit and giving Thurman a bit more breathing room. While Chaves was able to survive the round, he was clearly in pain in between rounds before a wild onslaught from Thurman forced him to take a full ten count.