Omowale Adewale is a 34-year-old accomplished amateur boxer, but it’s his work with youth outside of the ring that makes him a champion. In 2006, he started REBEL (Rallying Educating Building Effective Leadership) and he now runs G.A.ME (Grassroots Artist MoveEment), which focuses on preventing youth incarceration, and providing healthcare to disadvantage communities. 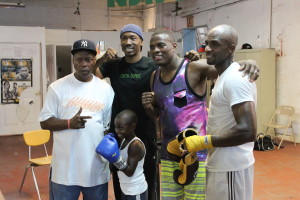 On Friday, the 2012 Brooklyn Brawl winner ran his first youth clinic inside of a gym. With the help of Judah Brothers Boxing Gym and WBO Middleweight champion Peter “Kid Chocolate” Quillin, he’s managed to combine his passion to help youngsters, with his love of the sweet science.

“I’ve been doing these clinics in offices, because gym fees are too expensive,” Adewale said. “This is the first time we were able to get into a gym and for that I’m grateful to the Judah Bothers Boxing gym. But this is the type of work they’ve been doing within the community.”

That may soon come to an end.

The man who runs the gym, trainer Yoel Judah is embedded in a heated battle with the buildings landlord, in an attempt to keep its doors from shuttering.

“We beat him twice and now he’s trying to do it again,” said Judah. “This guy’s greedy man, he wants money. He don’t care about the neighborhood or the kids.”

Judah BROS is located in one of the city’s toughest neighborhoods, East New York, Brooklyn. It caters to everyone from established fighters, to gang members, and less privileged children from group homes.

“We got kids from shelters, from homes, from bloods, from crips, from gangs, that ran away from their fathers, that don’t like their mothers. I mean they come here from all types,” Judah said.

The facility offers children the chance to use its computers and has a basketball court that they can utilize after they train. Along with trainers who teach them self defense and discipline, the building keeps the youth occupied and out of trouble.

“They come here with a bad attitude and we change that right away. No you can’t slap your mother, you can’t curse your father,” Judah said. “Leave the gangs alone you don’t need a gang. We teach these kids how to fight, but mainly how to live and grow.”

Judah knows what it takes to win. He trained his son, five-time world champion Zab Judah for most of his 17 year career. So with the help of City Council members and Police Commissioner Philip Baker this is a bout he doesn’t intend to lose.

“I have 30 little kids in here, we got the whole neighborhood behind me and we’re fighting,” said Judah. “I’ve got a few Politicians helping me and we aren’t letting it [the closing] happen.”

On this day the gym thrives. As one of Brooklyn’s proudest sons Peter Quillin works the mitts with young up and comers. Quillin believes it’s important to give back to the youth in the borough he calls home.

“When I go back to my childhood the best moments I could remember are with the people who took the time out to do something positive in my life,” Quillin said. I just want to carry on that part of me to other people and hopefully they can carry it on to others and they want to change people’s lives”

26-year-old Brooklyn resident Kye Robbins just two weeks into the sport was able to work with the champ and sees the experience as invaluable to his growth as a fighter. It inspired him to never give up on his dream to become a professional boxer.

“To be surrounded by someone of that stature and to get that type of knowledge is like a god gift, a blessing for me,” Robbins said. “It motivates me to work harder at achieving my dreams.”

Adewale believes that their individual goal is to improve the community. That is the reason boxing figures like Judah, Quillin and himself unite.