Daniel “The Miracle Man” Jacobs has gone 3-0 since his return from a successful battle with Osteosarcoma (bone cancer). On Monday, he’ll look to extend that streak when he takes on Giovanni Lorenzo in the main event of the inaugural “Golden Boy Live!” Card on Fox Sports 1. 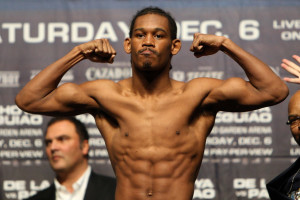 The fight is part of an overall plan by his manager Al Haymon and promoter Golden Boy to bring Jacobs along slowly.

“Coming back initially we wanted to make sure we got the right fights,” said Jacobs. “When I say right, I mean stepping up in competition just enough to where we’re getting the rust out, but not facing a lot of danger. I feel like I’ve gotten the rust out and this fight is the perfect step up for me.”

Three years ago, Jacobs was on a fast track to stardom when he took on Dmitry Pirog for the vacant WBO middleweight title in Las Vegas. During fight week he was dealt a severe blow when his grandmother (the woman who raised him) passed away. In round five of the bout, a Pirog right hand put Jacobs on his back and just like that, a shooting star was stopped in its tracks.

“There was a lot of pressure knowing that I lost my grandmother the same week of the fight,” Jacobs said. “It was just a little too much for my body and mind to handle. I wasn’t at a place where I needed to be at to compete in a match of that magnitude.”

The Brownsville fighter went on to stop his next two opponents, only to be blind sided by the signs and symptoms of the cancer. He began to feel sick during a trip to visit troops in Iraq.

“Me, Oscar De La Hoya, Adrien Broner and Seth Mitchell went overseas to see the troops as part of the USO tour,” Jacobs said. “I got very sick out there, to the point where I couldn’t even finish the tour. Once I got back I started feeling symptoms in my legs, they started feeling weak and floppy.”

Initially he dismissed his fatigue as the result of inactivity, until it progressed to the point where he could barely walk.

“Boxers usually associate weakness in their legs with not training, so that’s what I thought,” said the two-time National Golden Gloves champion. “I ignored it until it got worse and eventually I had to use a cane. That’s when we started going to the doctor and found out that everything had developed.”

Jacobs questioned whether or not he had a future in the sport, after surgery to remove a tumor from his spine left him paralyzed from the waist down. That lingered for a month, along with numbness in his legs, which lasted an entire year. Yet, he advanced quickly through physical therapy which gave him the confidence he needed to get back into the gym. Jacobs believes that without the lessons he learned in the ring, he wouldn’t have been able to overcome the obstacles he faced during his recovery.

“Once I got into therapy I was progressing so fast I was like, I’m going to come back and fulfill my dreams,” said Jacobs. “I’m going to prove the doctors wrong and everyone wrong who didn’t believe this was possible. Boxing taught me the dedication, sacrifice and mental focus that only this sport could teach you. Without that it would’ve been hard for me to go through that battle.”

Well into his comeback, not only does he believe he’s found his old form, but he sees the post-cancer version of himself as being the best he’s ever been.

“I’m better now than I ever was before,” said the middleweight contender. “My body has been agreeing with my training, and we’re doing more things now then we’ve ever done before. I’m stronger mentally and my body is physically better.”

With his charity “Get Into The Ring” The “Miracle Man” has used his experiences to help people cope with cancer and other issues near and dear to his heart, such as childhood obesity and bullying. So far the organization has brought awareness to individual cancer patients and Jacobs has also been going to youth centers to lecture children on nutrition and teach them conditioning. On Friday the charity will hold its first fundraiser at the Starrett City Boxing Club in Brooklyn.

Jacobs took up boxing at the age of 14 because he was the target of bullying himself. Now with a child of his own, he sees bullying as an epidemic and in tackling the issue hopes to set a good example for his four-year-old son.

“What we’re trying to forge is something so that kids who have low self esteem, who don’t believe in themselves can find an outlet, get together and uplift one another,” Jacobs said. “I feel like I’m being used as a tool to do so much more. My goal in boxing is to influence and inspire people. If I’m a 10-time world champion my son will say that his dad was a great boxer, but what about his dad as a person. For me that’s everything, to give my son something to look up to and be proud of.”

If Jacobs wins on Monday he sees himself moving into the top 10 of the 160 pound rankings. He would like to fight someone in the top five next, before eventually achieving his ultimate goal of competing for the WBC middleweight title.

“Ultimately when you think of a champion you think of anyone who has that green belt [WBC],” said Jacobs. “So whenever I do step up, I’d like to fight whoever has it. I don’t think I could be considered the best or the middleweight champion unless we got the green belt.”

The 26-year-old has stood up to bullies, made it out of one of Brooklyn’s toughest neighborhoods and beat cancer. Win or lose, expect the “Miracle” to continue inside of the ring, but more importantly impact lives outside of it.

“I feel like my life has been like a movie and god has orchestrated my life according to his plan,” Jacobs said. “We’re going to orchestrate this plan God has for us and when we do, it’s going to be epic, because it’s going to inspire so many people all over the world.”